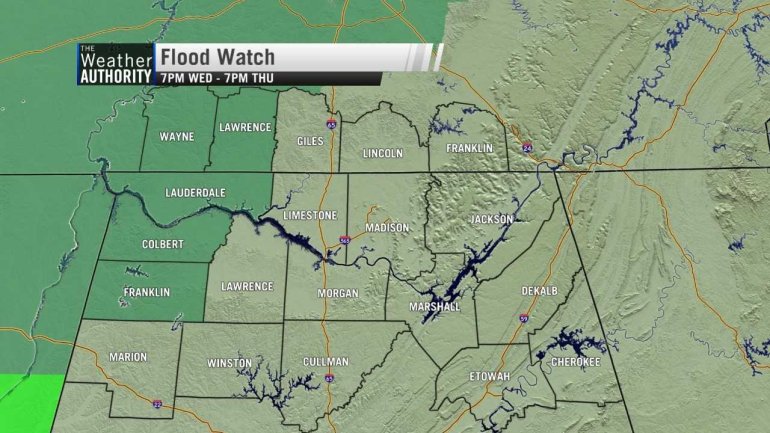 The National Weather Service has issued a Flood Watch for parts of the Tennessee Valley for Wednesday evening through Thursday evening.

The watch currently includes Lawrence and Wayne Counties in South Tennessee along with Lauderdale, Colbert, and Franklin Counties in North Alabama.

Heavy rain is expected to move into Northwest Alabama Wednesday afternoon before spreading across the entire Tennessee Valley Thursday.

…Heavy Rain Expected Across the Mid-South Today through
Thursday…

.An upper-level storm system will interact with a slow-moving
cold front, resulting in heavy rainfall across the Mid-South.
Heavy rainfall is expected to shift into the I-40 corridor and
then points south during today and into tonight. Widespread
rainfall amounts of 2 to 4 inches are expected, with localized
higher amounts. Run-off from heavy rainfall is expected to result
in rapid rises in river and stream levels and may cause low-land
flooding. Urban and other poor drainage areas may also experience
flooding. Rain will decrease in coverage and intensity from west
to east on Thursday as drier air moves into the Mid-South.

When is the last day to register to vote in Alabama?

When is the last day to register to vote in Alabama?

Medical weed bill will get another chance in session

Medical weed bill will get another chance in session

SCOTUS to hear arguments on Ala. congressional map