Steady moderate to heavy rainfall Sunday is leading to a swelling of nearby creeks, streams, and small rivers.

For that reason, the National Weather Service in Huntsville has issued a Flood Warning for the Paint Rock River near Woodville, in the Madison/Jackson County line area.

As of Sunday night, the Paint Rock River is at 7 feet, and it is forecast to reach flood stage of 15 feet on Monday afternoon. The river is forecast to crest at 16 feet through early Tuesday morning.

A Flood Warning means gradual flooding is imminent or occurring. Do not attempt to walk or drive through flood waters, since the flood can impact the ground below the water. It is best to turn around and find a different route.

Below is additional information from the National Weather Service in Huntsville, as well as local flood reports from around north Alabama. 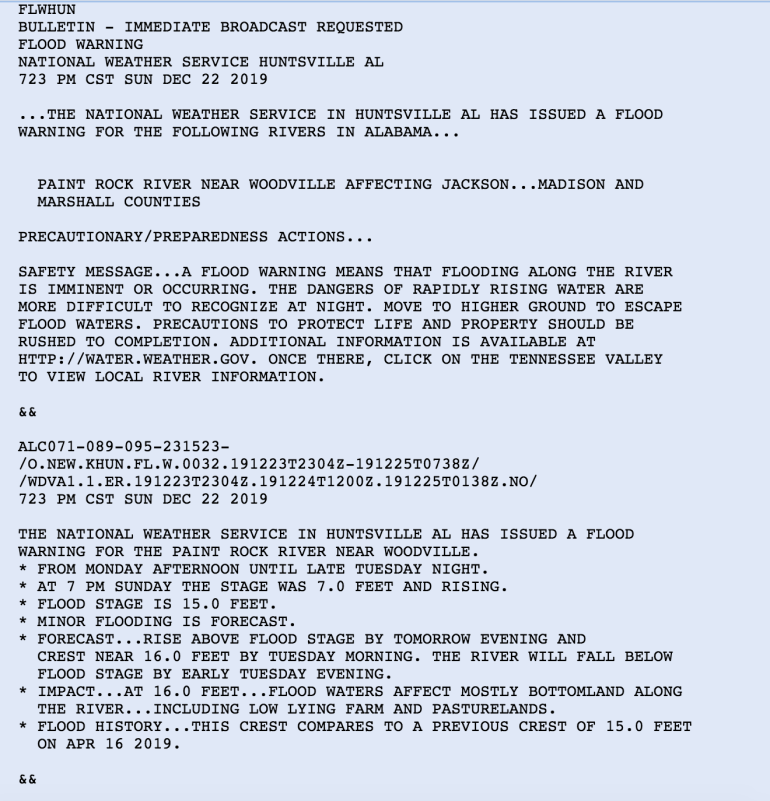 Rainfall reports so far across north Alabama (12am through 5pm Sunday)… How much rain has fallen where you are? A few minor flood reports are trickling in to the newsroom, but is anyone noticing water covering nearby roadways? #valleywx #ALwx pic.twitter.com/h6hyczrkLZ

Local spotters reporting #flooding on Gum Springs Road in Hartselle (east of I-65)… Now that the sun is down, be extra careful while driving; if you can't see the lines on the road ahead of you, you may want to turn around and go a different way #valleywx #ALwx pic.twitter.com/jS2Q9iIFSY

@ChristinaWHNTwx @spann Took this less than 2 hours ago of a creek on Gum Springs Road in Morgan County. Even ditches are full of water. pic.twitter.com/KZEtsCYMw2

Cool Clouds: wind shear and a beautiful view of the Alabama sky

As the sun set on Tuesday evening, it was obvious how wind shear in the atmosphere was driving the clouds across the sky!

The high, thin cirrus clouds are riding the upper-level wind flow pattern at the level of the jet stream (which is not terribly strong over Alabama Tuesday).