Northwest Alabama is still recovering from the effects of flash flooding that occurred Sunday.

A slow moving thunderstorm developed over the Florence-Muscle Shoals area Sunday afternoon, producing as much as 3 to 9 inches of rainfall over the course of a few hours. 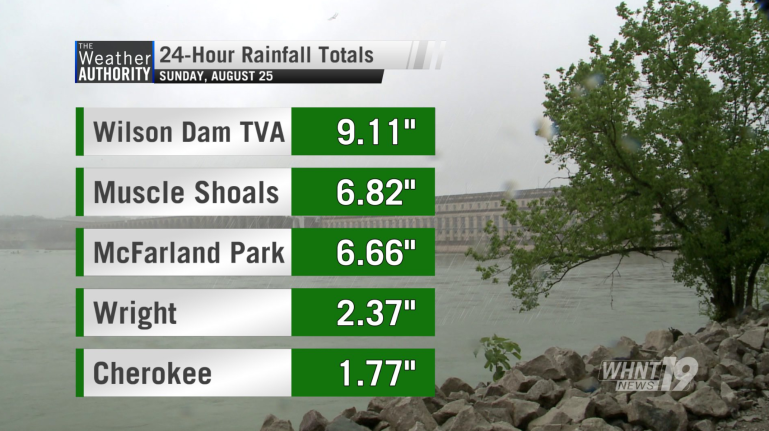 The National Weather Service issued a Flash Flood Emergency for the entire Shoals area Sunday based on reports from the local Emergency Management agencies. According to the NWS, “an extremely dangerous situation developed across the Shoals late [in the] afternoon!” It has since been canceled, however the area is still recovering from the heavy rain that fell well into the evening.

Road closures have been reported from the area, including:

The NWS also said the Lauderdale EMA is comparing the flooding in Florence to the historic flooding that occurred in 2003, and it says that the rainfall totals measured at the TVA Wilson Dam is close to the all-time daily 24-hour rainfall record for all of north Alabama set on December 25-26, 2015 at Lake Guntersville.

The @nwshuntsville says the rainfall stat at Wilson Dam/Muscle Shoals TVA is close to the *All-Time* measured 24-hr daily rainfall record for *ALL* of north Alabama, which was set on Dec 25/26, 2015 at Lake Guntersville Water Plant (9.80" of rain) (2 of 2) #ValleyWx #ALwx pic.twitter.com/VfJgNn5EeB

Below is additional information from the National Weather Service in Huntsville.