‘Barry’ may be a remnant low now, but the tropical moisture pumping in over the South keeps coming. It’s not leaving anytime soon, either. Rain bands running around the outskirts of the remnant low are dumping heavy rain and creating heavy thunderstorms nearly 400 miles east of the center. As the low weakens and the storm’s energy gets absorbed into the weak jet stream aloft this time of year, the organized rain will slow down; however, the scattered daily thunderstorms with heavy rainfall will last all week long. 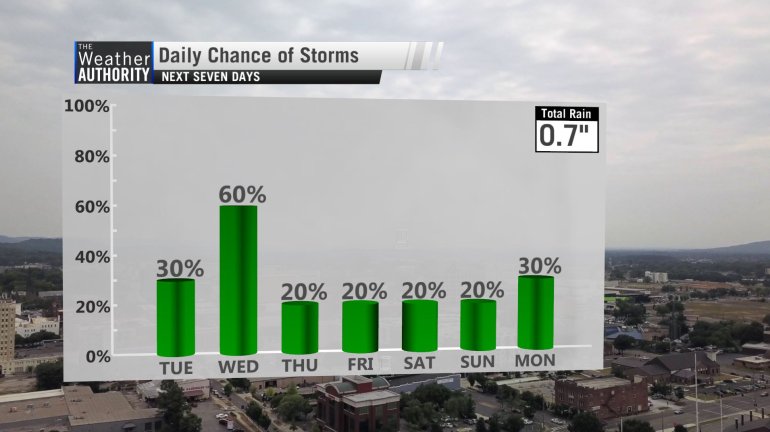 Clouds thin, and the sun becomes more prominent later this week; that means it’ll get hotter again quickly. Fewer showers in the area (except The Shoals) gives us a hotter Tuesday: highs around 90ºF and a heat index above 95ºF. 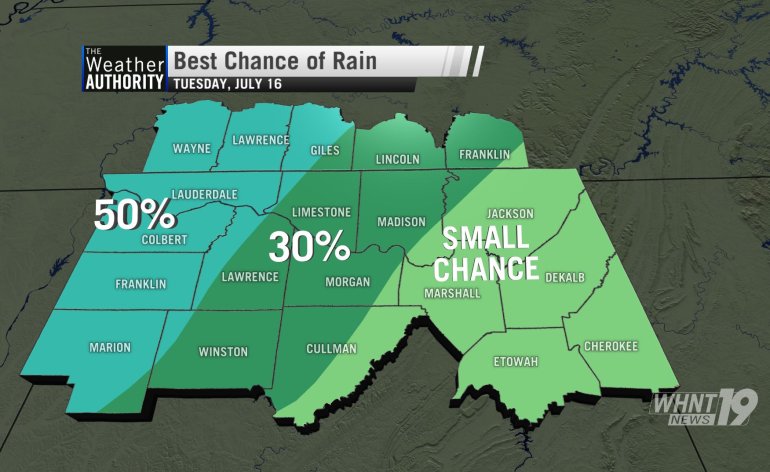 The remnant low sends one more band of rain and thunderstorms through Alabama and Tennessee on Wednesday; beyond that, the heat will crank up, and temperatures soar back to the mid-90s for highs. 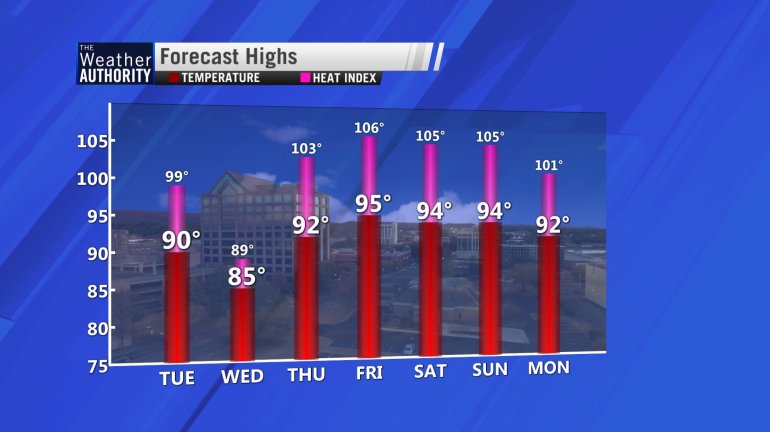 How much more rain? If you didn’t get your fair share of rain in the past week with the scattered daily storms, you still have a chance. If you live in Huntsville or Decatur it’s probably unthinkable that some spots within 30 miles haven’t had much rain. A single rain gauge on Spring Creek near John Hunt Park in South Huntsville has 3.84” of rainfall since Friday; a rain gauge near Central Avenue in South Decatur has 2.13” in the same period. Those are on the high end of the range; there are a lot of spots with less than 0.10” since Friday as well!

So where do we go from here? The coverage still looks somewhat chaotic. There’s a rhyme and reason to it in the atmosphere, but for forecasting purposes, it’s random chaos. Some will get some heavy rain, some will get left in the dust yet again this week.

Wednesday looks like our ‘best’ chance of rain area-wide. A band of showers and thunderstorms blows through fairly early in the day bringing briefly heavy rainfall, thunder and lightning to some communities. Others will still get the short end of the stick on rain Wednesday with little to nothing at all. On average, it will be close around 0.5” to 1.0” of rainfall by Wednesday afternoon.

There won't be quite as many storms around on Tuesday, but they do look more widespread again on Wednesday: https://t.co/m7Wku0dgoI #valleywx pic.twitter.com/mH7rzBnRBV

You could see up to 20 meteors per hour late Tuesday night into Wednesday morning as the Orionid Meteor Shower peaks! The constellation Orion rises above the eastern horizon before midnight, and is well in view between midnight and 4 AM. Look for the meteors near or just to the left of Orion's belt; that's where you'll find the radiant point.

The weather looks fantastic: few if any clouds at all and tolerable temperatures in the upper 50s and lower 60s between 10 PM and 4 AM.

Warm Temperatures Hanging Around For the Next Several Days

We hit 80° at Huntsville International Airport on Monday afternoon. This was the seventh day this month at or above the 80° mark. Overall temperatures are slightly above normal for the month with an average high of 75°8. Look for more warm this week. For the next seven days, we stay at or above the average high of 74°. We'll be in the lower 80s through Thursday with middle to…

A Magnitude 7.5 earthquake has occurred about 57 miles southeast of Sand Point, Alaska. This is along the Denali Fault, a strike-slip fault line.

Aftershocks of over M 5.0 are being felt near the epicenter of the original quake.