As February 2019 comes to a close, the month will go down in record books for both the warmth as well as the rain that occurred within the 28 day period.

The joke was on Jake that day, as temperatures soared to the 70s on February 2, about 15 degrees warmer than an average February day. The rest of the week featured temperatures in the upper 60s to low 70s, culminating on February 7 when daytime highs reached 78 degrees in Huntsville and 79 degrees in Muscle Shoals — this set the record high for the day.

February 2019 was also the wettest month on record for Huntsville: 12.60 inches of rainfall, the majority of which fell during the 10-day span of February 15 through February 24.

In Muscle Shoals, February 2019 will go in the record books as the wettest February with 13.85 inches of rainfall, the majority of which fell during the 10-day span of February 15-24.

February 23rd broke the record for the most rainfall recorded on that date in both Muscle Shoals and Huntsville.

The Tennessee River at Whitesburg crested at 22.91 feet during the event, which is the upper end of “Moderate” flood stage and is very close to the “Major” flood stage of 23 feet. As a result, Ditto Landing and Hobbs Island flooded, as well as nearby homes and roads. Officials say floodwaters were as high during the heavy rain event in 2019 as they were during the Christmas 2015 flood. 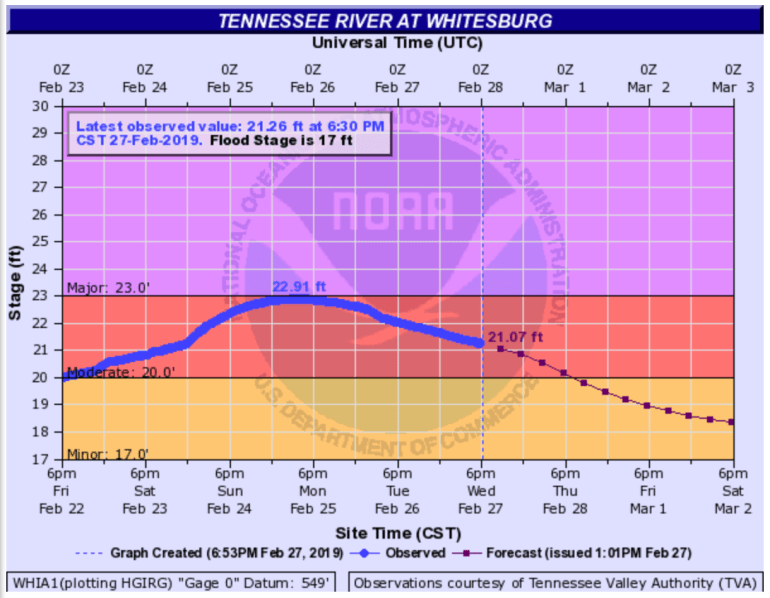 The Tennessee River at Florence crested at 28.99 feet, which is “Moderate” flood stage. Nevertheless, water covered the Marina at McFarland Park with extensive flooding throughout the park. Alabama State Highway 20 was also flooded at the underpass below US 43 and US 72.

According to the National Weather Service, the Tennessee River at Florence crested Sunday afternoon at a height of 29-feet. The river is forecasted to stay well above flood stage for most of the upcoming week. This is said to be the second worst flood at Florence since TVA began flood control in the valley. In addition, data from the National Weather Service indicates that this recent flooding even is the the third worst since 1897.

Below is a photo gallery of the flooding that occurred in February 2019.