Summertime often brings the most intense lightning displays of the year, which has been pretty evident by storms this past week. Not only have storms been producing frequent lightning, but storms have been producing a wide variety of lightning types.

‘Heat’ Lightning: We received a flood of incredible photos and videos featuring what many refer to as heat lightning. This title is misleading and inaccurate though; by official definition heat lightning does not exist. Heat lightning usually refers to lightning that is simply too far away to hear, and so it simply appears as a flash in the distance.

Cloud-To-Air Lightning:The electrical current that produces lightning can strike in any direction to reach the opposing charge it's after, and that includes straight into the air. Jim Hodgson caught video of this occurring Tuesday night.

Cloud to air lightning appears as a bolt striking straight up out of the cloud into the air. This occurs when positive charges accumulate within the top of the cloud and reach out into the negatively charged air around it.

Bolts From The Blue: The reason we tell you to always head indoors if you hear thunder is because lightning can strike up to 25 miles away from the parent storm! Often called a bolt from the blue, these lightning strikes extend from the updraft of a storm and extend outward for miles before striking the ground. 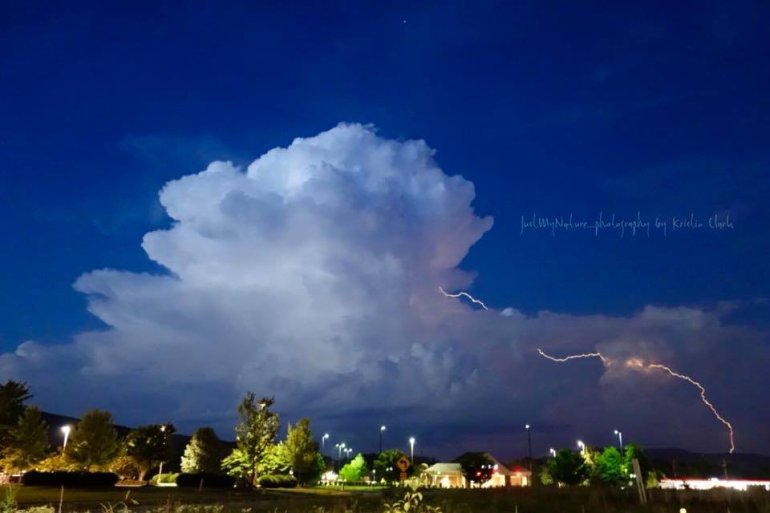 This type of lightning is actually fairly common in the summer months and is one of the most dangerous types. As you plan for outdoor activities in the coming weeks remember this: if you can hear lightning, you are close enough to be hit.

For more information on how lightning forms and the different types of lightning strikes you can head here!

Fall is right around the corner! The official start of the Fall season comes Tuesday morning.

Through this week, temperatures look to hover around or a little below average. Highs will be in the 70s and low 80s. Some of the coolest weather of the week will be as some clouds and rain associated with Beta moves through around the middle of the week.

Beta remains a heavily sheared and disorganized storm in the Gulf this morning.

This storm is expected to slowly move west towards the Texas and Louisiana coast through the early week, but some rain will extend eastward from the storm and bring some occasional rain to the Mississippi and Alabama Gulf coast as well.

Accumulated Cyclone Energy (A.C.E.) is a great way to measure the activity of a hurricane season. It takes into account the total amount of energy produced by storms, rather than just counting the number of storms or hurricanes. A.C.E. tends to be a great way to cut through seasons that might have a lot of named storms that aren't very strong, or a season with several short lived storms, and provide a better overall view of how active the season was. Just a few short weeks ago, A.C.E. in the North Atlantic basin was running fairly close to average, despite the massive amount of named storms. But recent storms like Laura, Sally, Paulette, and Teddy have produced a tremendous amount of energy, catapulting our A.C.E. so far in the North Atlantic this year over 20 units above normal.

We're actually running below average in the whole Northern Hemisphere though. That's because things have been very quiet in the usually very active Northwest Pacific and the Northeast Pacific.