Isolated showers Friday evening fade away as the sun sets, but the hot, steamy air mass sticks with us on this First Day of Autumn 2017. 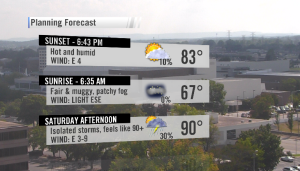 Temperatures start out in the lower 80s at 7 pm and slowly fall into the mid-70s by the time Football Friday games end this evening. We expect more foggy spots late tonight as temperatures drop into the upper 60s through early Saturday morning.

It’s just more of the same for the weekend: hot, hazy and humid. Temperatures stay about 5 to 8 degrees above average for late September with a feels like around 90ºF to 95ºF from noon to 5 PM. A weak disturbance (upper-air low) over the region stirs up some unevenly scattered showers and storms, so have a back-up plan for your outdoor activities in case a downpour heads your way.

Track scattered showers storms with WHNT.com’s Interactive Radar or swipe over to the radar feature on Live Alert 19! Live Alert 19 also offers severe weather alerts and notifications when rain (and lightning) are getting too close for comfort.

Fall weather nowhere to be found: The Autumnal Equinox at 3:02 PM CDT Friday was not a light switch to bring on the Fall-like weather. Instead, the heat, humidity and bright sunshine combined to make it feel like a day in the middle of July instead of late September.  This hot weather pattern stays in place through next Wednesday; the first in a series of cold fronts moves in by next Thursday bringing a chance of some spotty showers and a substantial cool down for Friday and next weekend.  The blue on the map here is a good thing if you’re hoping for cooler weather!

Some Fall trivia to grow on: Have you ever considered how fast the Earth spins?  The tangential velocity of the Earth (on the surface) in Huntsville is about 851 miles per hour. 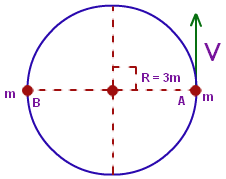 So, you could think of it as if Madison County were chasing Jackson County at about 851 miles per hour.  It just so happens Jackson County is running away at the same speed.

Why bring this up on the Autumnal Equinox?  This cool animation from NOAA’s Earth Observatory sparked the idea even though it’s not Earth’s rotation causing the seasons to change; it’s the revolution around the Sun and our 22.5ºF tilted axis.  In the Tweet below, you can see how the satellite in geostationary (staying put over one geographic spot) orbit views the changes in how the Sun illuminates the earth from equinox to equinox.

It's the #FirstDayofFall in the Northern Hemisphere. Here @eumetsat's #Meteosat shows us one year on our planet. https://t.co/Py3DcA4PIr pic.twitter.com/Cq7j3oZ9Bm

Cool stuff for a hot first day of Fall, huh?

November has been unusually warm and dry.

Huntsville International measured 0.48" through Wednesday afternoon for a grand total of 0.56" of rain so far this month. Through the 25th, that's eighth-driest on record since 1894 in Huntsville!

One or two heavy storms may still develop; however, it is unlikely that 'severe' storms develop with the passing cold front Wednesday evening.

The Storm Prediction Center maintains a risk of a few severe storms in the area on Wednesday evening; however, the threat is very, very low.