Drought conditions in the Valley have improved considerably since this summer, but abnormally dry conditions still prevail in much of northern Alabama. 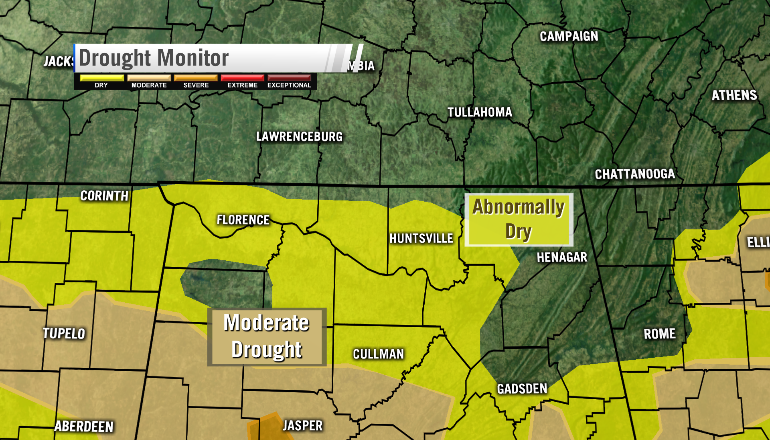 As of the latest U.S. Drought Monitor, only southern portions of Cullman and Franklin counties (AL) are experiencing drought conditions.

Tropical Storm Zeta has formed southeast of the Yucatan Peninsula, and looks to continue to intensify as it slowly moves northward.

The storm's current track would bring it towards the Central Gulf Coast by the middle of the week. Current conditions are relatively favorable for continued development in the Western Caribbean, but as the storm moves into the Gulf, conditions do start to become a bit less favorable for the storm.

Tropical Depression Or Storm Likely To Form In Caribbean

A broad area of low pressure near Cuba has shown a decent amount of convection and organization over the past 24 hours, and now looks poised to develop into a tropical depression or storm within the next day or two.

This system will traverse over Cuba before entering the Southeastern Gulf of Mexico. At this point, it's still unclear what kind of path this system will take, but that should become a bit more clear as the system continues to develop and move northward.

Heavy rain and storms rumbling through, may impact Football Friday

It is warm and muggy across the Tennessee Valley, and storm clouds are developing throughout the region.

Regional radar imagery shows that a line of scattered showers and storms are moving west from the Mississippi River Valley into the Tennessee Valley, which means heavy rain and storms are developing in north Alabama with more on the way. Use the interactive radar below to track the storms near where you live.