At 12:45 p.m. Sunday, the National Hurricane Center confirmed Hurricane Dorian made landfall in at Elbow Cay, Abacos in the Bahamas.

The NHC said to expect wind gusts over 220 mph, storm surges of 18-23 feet, and some waves even higher.

The 12:45 statement reads as follows:

Dorian made a second landfall at 1:24 p.m. on Great Abaco Island near Marsh Harbor. Winds increased to 185 mph, tied for the strongest Atlantic landfall on record.

An updated statement said the storm was “heading with all its fury toward Grand Bahama.”

Threats from the storm remain the same

The eye of #Dorian has made a second landfall at 2 pm EDT (1800 UTC) on Great Abaco Island near Marsh Harbour. Maximum sustained winds were 185 mph at the time. This is tied for the strongest Atlantic hurricane landfall on record with the 1935 Labor Day hurricane. pic.twitter.com/O9hrotTTbS

Threats from the storm remain the same: wind gusts over 220 mph, storm surges of 18-23 feet, and some waves even higher.

Hurricane Dorian continues to be an incredibly powerful storm and has not shown any real signs of weakening. Dorian will slowly traverse over the Northern Bahamas over the next 24+ hours as it begins to slowly stall east of Florida.

Beyond that, this system will recurve to the northeast. Exactly when it does that will greatly determine the overall impacts Dorian will have on Florida, Georgia, and the Carolinas.

Quiet weather in the Tennessee Valley: Our weather across north Alabama and south Tennessee will be much more tame. A lot of us could use some good rain,  but there isn’t any meaningful rain in sight this week. An isolated shower is possible this afternoon, but 90% or more of us see nothing but sunshine today.

Starting out on a warm note; Finishing cooler: 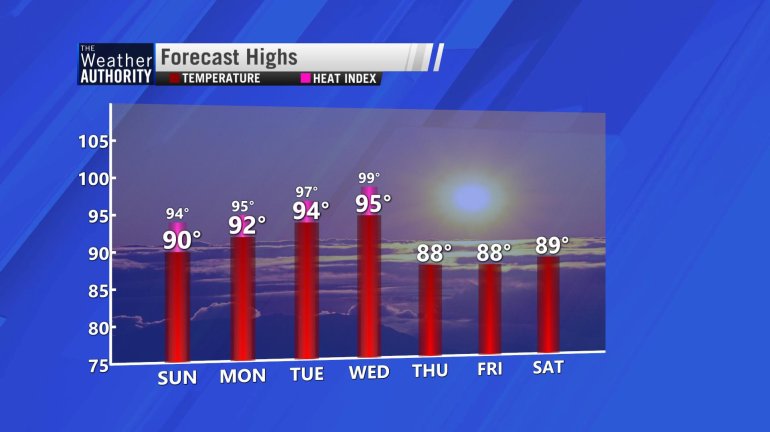 The heat will build through the first half of this week. Highs will climb into the mid 90s by Wednesday, with a heat index approaching 100. The heat and humidity back off a bit by Thursday. It will still be warm, but not quite as hot or humid.

Another Nice Weekend For College Football

The weather for college football looks good again this week!

Alabama vs. Texas A&M - News 19 at 2:30pm - Bryant Denny Stadium - Expect a sunny sky with kickoff temperatures in the middle 70s. It will be in the middle 60s in the 4th quarter

Nice Stretch Of Fall Weather Ahead!

Little to no rain is in the forecast over the next seven days. Look for a pleasant afternoon today and Thursday with highs in the lower to middle 70s. Another cold front cools us down Thursday evening into Friday. We should be in the upper 70s to near 80 for the end of September. Temperatures will be below that through next week! Enjoy the fall temperatures! Rain? Little to nothing!…

Eyes on the Caribbean for potential tropical cyclone development

The National Hurricane Center is giving this disturbance a 60% chance of development into a tropical depression by this weekend.

Gray parrots separated at zoo after swearing a blue streak

Trump to far-right extremists: ‘Stand back and stand by’

Deadline nears: How to submit your claim in Apple’s $500M iPhone slowdown settlement