Do you love snow?!

If the answer is “yes”, show your love by sharing these fun facts with your friends!

– All snowflakes have six sides.

Due to the chemistry of water and how it interacts with other water molecules as it freezes, all snowflakes have six sides. For those who love science, more information about the molecular bonds within frozen water molecules is available in this video below.

– All 50 states have recorded snowfall

Yes, including Florida and Hawaii!

On January 19, 1977, a particularly strong arctic front arrived in Miami, producing enough snowfall for a trace to be recorded in Hollywood, Florida.  The National Weather Service also notes that rain mixed with snow was reported in the Bahamas on that date!

In Hawaii, the high mountain volcano summits on the Big Island can receive snow as early as October and throughout the rest of winter.

According to Ken Rubin, an assistant professor of geology and geophysics at the University of Hawaii, “it snows here every year, but only at the very summits of our three tallest volcanoes (Mauna Loa, Mauna Kea and Haleakala).”

“The snow level almost never gets below 9,000 feet in Hawaii during the winter, but since these mountains are taller than 13,600 feet, 13,700 feet and 10,000 feet, respectively, they get dusted with snow a few times a year. It rarely stays on the ground for more than a few days though.”

According to the National Weather Service, most snowflakes fall at about 2 to 5 feet per second, which is a similar pace a person would make while casually walking through a park.

The reason for the range is due to the variable water content within snowfall. The ‘snow to ice ratio’ or Snow Ratio determines how much volume of snow you get for a given volume of water. The “average” ratio of 10:1 (ten to one) means that every 10 inches of snowfall equals one inch of liquid water. This ratio can change depending on the moisture content and air temperature of the air mass. Colder, drier air can produce a Snow Ratio as high as 30:1 (thirty inches of snow per 1 inch of liquid water; it is more difficult to make snowballs with dry snow). Warmer, more humid air can produce lower Snow Ratios on the order of 5:1 (five inches of snow per 1 inch of liquid water; this snow is perfect for making snowballs!). 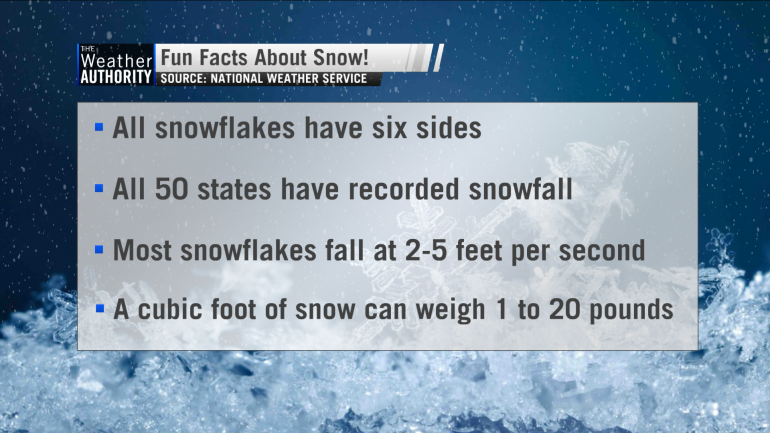 At least 70 killed, thousands hurt in massive blast in Beirut