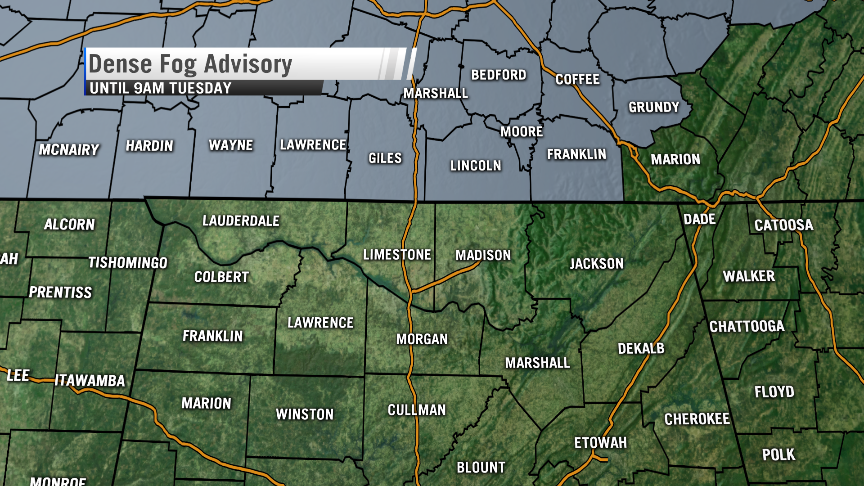 A Dense Fog Advisory has been issued for Southern Tennessee through 9AM Tuesday. The steady rain from Monday has left plenty of moisture for thick fog to develop Monday evening and last through the overnight hours.

Visibility could drop to less than 1 mile by Tuesday morning, making for a difficult commute. Remember to drive slowly and use your low beams if you encounter areas of fog. 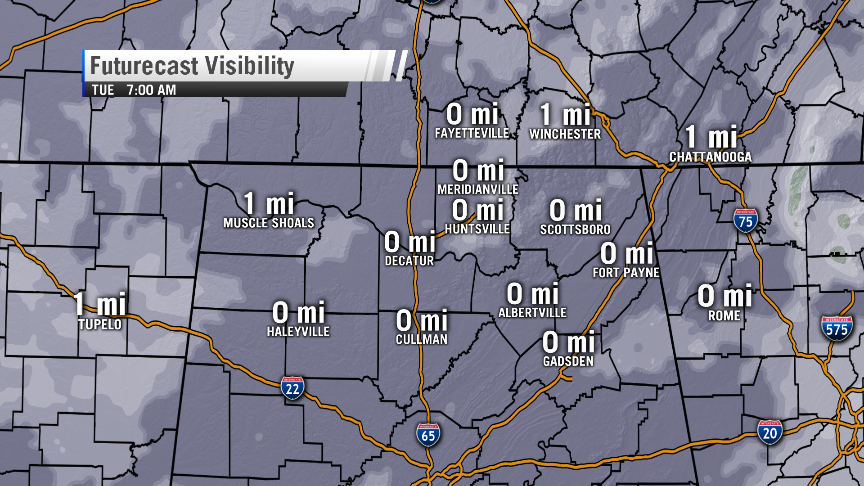 The full advisory is below:

…DENSE FOG ADVISORY IN EFFECT UNTIL 9 AM CST TUESDAY…

…DENSE FOG ADVISORY IN EFFECT UNTIL 9 AM CST TUESDAY…

The National Weather Service in Huntsville has issued a Dense Fog
Advisory, which is in effect until 9 AM CST Tuesday.

* TIMING AND AREAS AFFECTED…Lincoln, Moore, and Franklin
counties in southern Middle Tennessee until 9 AM CST Tuesday.

* VISIBILITY…Widespread visibility reductions between one half
of a mile and one mile, with frequent reductions to one quarter
of a mile.

* IMPACTS…Sudden reductions in visibility will lead to hazardous
driving conditions for those traveling in the advisory area.

A Dense Fog Advisory means visibilities will frequently be
reduced to around one quarter of a mile. If driving, slow down,
use your headlights, and leave plenty of distance ahead of you.

Moderate to heavy rain showers and thunderstorms will move through north Alabama late Wednesday night through Thursday evening, and some areas may receive a large amount of rain in a short amount of time.

September has been dry in Huntsville: only 0.18" of rain in the past twenty-two days. It's not been like that for all of North Alabama and Tennessee, though!

Back on September 13th, it poured in The Shoals (but not from Huntsville east into Northeast Alabama)!

I know. You're reading that headline and shaking your head. Only in 2020, right! Hurricane Paulette dissipated in the Atlantic last week, but the remnant disturbance of showers re-organized late last night, and lo and behold, Paulette lives again!

This isn't the first time we've seen a storm come back from the dead. In fact, a storm with a big impact on Alabama, Ivan, did this in 2004. After making one landfall in Alabama, it came back out into the Atlantic, swung back into the Gulf, and impacted Louisiana as a Tropical Depression.