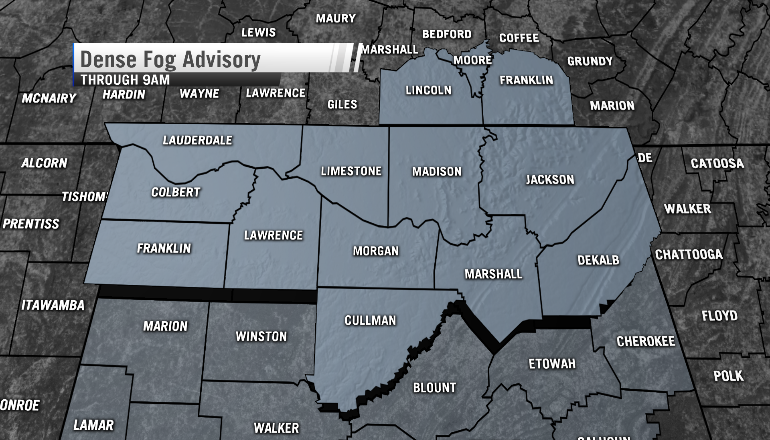 The National Weather Service in Huntsville has issued a Dense Fog Advisory for the Tennessee Valley through 9am Sunday.

Visibility could fall below 1 mile, making driving difficult. If you leave early Sunday morning, be sure to drive slowly and keep your headlights on.

Dense fog is especially likely in valley regions and along rivers or lakes. Fog will break up as the sun rises. Some patchy fog is still possible after 9am, but it will clear out completely by 10am.

The National Weather Service in Huntsville has issued a Dense Fog
Advisory, which is in effect until 9 AM CDT this morning.

* TIMING AND AREAS AFFECTED…All counties in northern Alabama, as
well as Lincoln, Moore, and Franklin counties in southern
Middle Tennessee through 9 AM CDT.

* VISIBILITY…Widespread visibilities around 1 mile, with
frequent reductions to one quarter of a mile or less. This will
be especially true in local river valleys and near large bodies
of water.

* IMPACTS…Dense fog will result in significant visibility
impairment and hazardous driving conditions for those traveling
this morning.

A Dense Fog Advisory means visibilities will frequently be
reduced to less than one quarter mile. If driving, slow down, use
your headlights, and leave plenty of distance ahead of you.

Chance For Tropical Development In Caribbean This Week

The National Hurricane Center is monitoring the potential for the development of a broad area of low pressure off the coast of Central America later this week.

Models do suggest there is some potential for some tropical development in the Northwestern Caribbean later this week as well.