It got cold again early Thursday morning; lows bottomed out as far down the thermometer as 20ºF in Russellville, 21ºF in Tuscumbia, and 27ºF in Huntsville.

It was cold enough in Fayetteville for ‘frost flowers:’ ground moisture that freezes and expands up in formations like this one from Julie and Jeff Helton:

Dry, chilly air blowing in around a strong ‘high’ northeast of the Valley makes it cold again tonight, but it won’t be quite as cold as last night.

Late-night Black Friday shoppers will need some layers! Temperatures bottom out around 30ºF to 35ºF between 2 AM and 6 AM, but we’ve got a nice turn-around coming for Friday and Saturday: highs rebound to the lower 60s.

Weekend specifics: Another cold front blows through on Saturday, but the air behind it won’t bring such a sharp change. It’s a relatively weak cool front, so yet again we see no real threat of rain.

Sunday’s weather behind the front is cooler: morning lows in the mid-30s, afternoon highs around 55ºF to 60ºF. 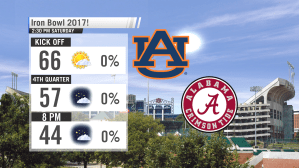 Expect middle 50s in the 4th quarter. No rain is in forecast. You can watch the game on WHNT News 19.

Slim chance of rain, slim chance of ‘cold’ next week: The ‘average’ high by next Monday is 59ºF. We don’t see ‘average’ that often; in reality, we typically see a range of temperatures around that number: roughly 9ºF above or below would be considered ‘close to normal’ for the last week of November.

We’ll be well within that range throughout next week. The one really unusual thing, though, is the dryness. We only have 0.85” of rainfall in November so far. That would be a dry week in an ‘average’ November. Instead, we’re looking at a top-ten driest November on record for Huntsville.

There is a small chance of some rain with a cold front by next Wednesday; however, at this point, rainfall looks meager (if you get any at all).

Only 3 of 20 GEFS ensemble members show rainfall over a ‘trace’ before December First. If we don’t get measurable rainfall at Huntsville International, November 2017 will be the fifth-driest on record.

Looking for more weather details like day-by-day specifics? They’re always online at WHNT.com/Weather and in the “Daily Forecast” section on Live Alert 19!

A break in the rain will occur overnight into early Saturday morning as a warm front lifts north from Birmingham into Middle Tennessee. Temperatures will rise through the early morning hours into the upper 50s to low 60s at daybreak Saturday.

With a warm and humid airmass in place, a few scattered showers and storms are possible for Saturday afternoon, though this rain will be more hit-or-miss instead of widespread and continuous. Afternoon highs will rise to the upper 60s to low 70s on Saturday.

Child tax credit vs. child care tax credit: Here’s how each could give more money to parents this year

Third stimulus checks: Here’s where we stand as February ends

No. 6 Alabama holds off Mississippi State 64-59 to win SEC