Skip to content
Watch Live
Watch Live
WHNT News 19 at 4:00
This is an archived article and the information in the article may be outdated. Please look at the time stamp on the story to see when it was last updated.
HUNTSVILLE, Alabama – Numerous storms moved through north Alabama Thursday, and a few were severe enough to produce structural damage. Cullman County Damage The White City Community Center in Cullman County sustained roof and structural damage after a possible tornado moved through the region. “It was sunny and calm before it hit. All of a sudden, it got dark and loud,” Matthew Howell said. His in-laws live around County Road 617 and went to the basement when the storm moved in. “Sirens were going off, we had plenty of warning,” Howell said. It doesn’t appear that anybody was seriously hurt. Several trees were uprooted and metal roofing was ripped off like tin foil. Radar imagery indicates that wind gusts as high as 94 mph occurred in the vicinity of the town. 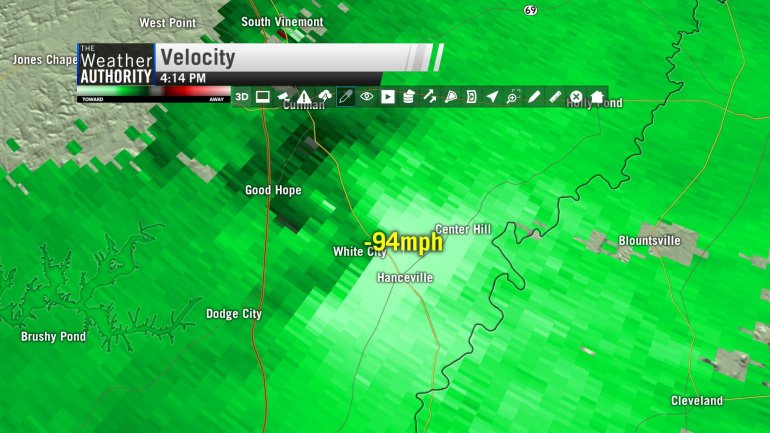 Blount County Damage Further east, a possible tornado touched down along Alabama State Route 75 between Oneonta and Allgood. The Blount County Sheriff’s Office is reporting downed power lines and damaged buildings in the area. Adriana Sanchez lives in the heavily damaged mobile home park in Allgood and says she’s glad her family sought shelter. “They had said the Tornado Warning and we were going to get out to go get shelter but it hadn’t started to rain,” said Sanchez. “We weren’t sure but we decided we need to but before we even got on Highway 75, the wind just started picking up. It started to rain harder and it felt like we were in the tornado.” Radar imagery indicates that inbound and outbound wind circulation within the Allgood and Oneonta area reached as high as 74 mph.

Post analysis of the #Oneonta/Allgood #tornado… Looking at the radar imagery from BMX, inbound velocities were as high as 74 mph at little more than half a mile above the ground (3500 feet) #ALwx #ValleyWx pic.twitter.com/7cCtLpMCjM

Damage from the tornado in Allgood in Blount Co. #alwx pic.twitter.com/yJ2o9qFvtd

Recovery efforts are on-going in the Oneonta area of Blount County.

Tropical Storm Cristobal formed in the southwestern Gulf of Mexico on Tuesday, and it could have an impact on the northern Gulf Coast including Alabama and Northwest Florida this weekend even if the storm's center stays west of Mobile as the current forecast as of Tuesday evening shows:

Key messages from the National Hurricane Center primarily deal with the short-term impact in Mexico; we will be watching closely to see how and when this could cause some rough surf, strong rip currents, and locally-heavy rainfall on the Alabama/Florida coast.

The National Hurricane Center designated a large, developing area of low pressure in the Bay of Campeche as Tropical Depression #3 at 4 PM Monday.