The past two days have been no fun. It’s been chilly and wet.

Some spots already have more than three inches of rain, and there’s more to come through Tuesday evening:

Refresh this page for the latest radar image: 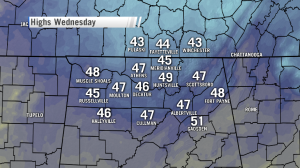 Once the rain moves out tonight, we get a little temperature set-back. Highs only reach the middle and upper forties on Wednesday afternoon – thanks mostly to the clouds that just won’t want to move out very quickly.

A few hours of sunshine may get a few communities close to 50ºF, but those who stay cloudy won’t even come close.

Then, there’s a nice warming trend on the way!  Check out these numbers going into the weekend.  Near 70ºF?  Yes, please! 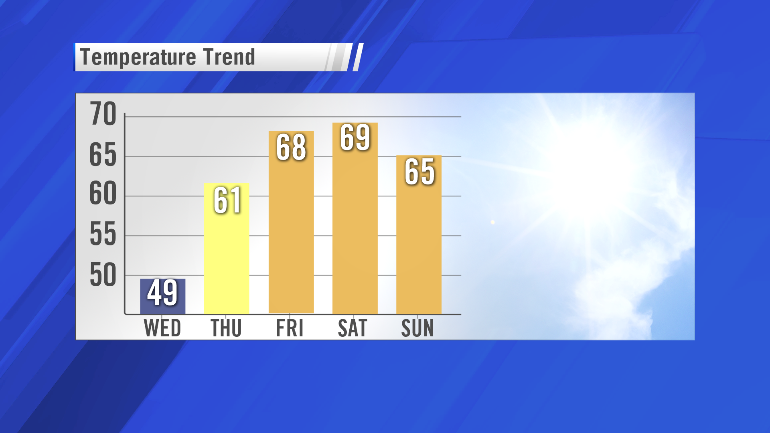 Looks can be deceiving. Those numbers over the weekend come with a chance of more rain. 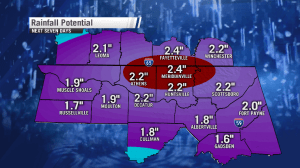 Most of it comes Sunday night into Monday, but let’s face it, take away full sunshine and 60s just aren’t quite as warm as they look on the board there.

Some guidance forecasts locally heavy rain again for Sunday and Monday; some 1-2″ totals aren’t out of the question.

The American-run GFS model is the most “bullish” with heavier downpours through Monday.

After that, the pattern is there for what *might* be a winter weather threat or two.  The clock is running out on us for snow.  We do occasionally get good snowfall in late February and March, but the majority of Huntsville’s snowfall history comes before Valentine’s Day.

Scary-looking clouds from this week’s storms: what do they mean?

Tornadoes are not common in June or July. They CAN happen, but they are not as likely because we do not often have the needed wind shear for a thunderstorm to produce one. Occasionally, storms produce look-alikes similar to what Jessie Nelms saw in Mount Hope (Lawrence County) on Wednesday evening:

Wednesday evening's wave of heavy storms ended around 9 PM, but there will be more spotty downpours overnight. Total rainfall through 6 AM looks small compared to what it's been like so far this week!

Isolated thunderstorms are possible. The heaviest ones could drop another 0.25" to 0.75" of rainfall before the sun rises Thursday.

Additional showers and thunderstorms are possible in the afternoon: this time mainly over Northwestern Alabama and Tennessee.

Sticking Closer To Average Climatology On Independence Day This Year

Our average high and low for Independence day is around 90° and 70° respectively, and that's about what we expect on Saturday. Historically, there's been at least some measurable rainfall around 40% of the Independence Days in Huntsville going back to 1894, although if you want at least a tenth of an inch of rain, only 30% of the days on record have that. Average rainfall for the day is just over a tenth of an inch. So, typically a few downpours pop up on the 4th of July, but not everyone sees rain.