We love receiving photos of the Weather Where You Live, and this one had us taking a second look! 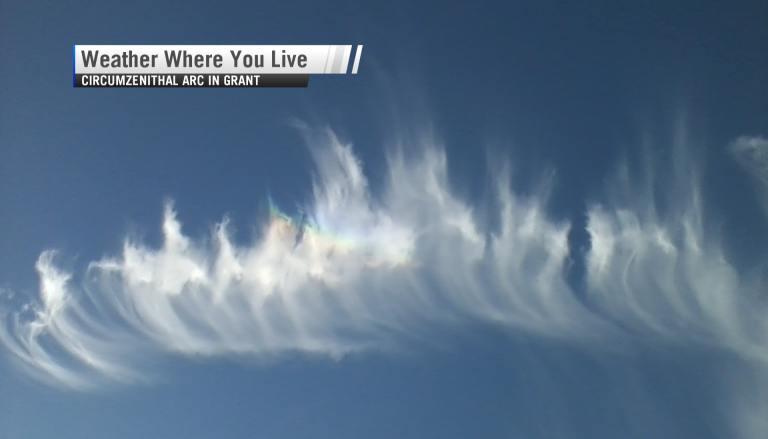 One viewer wrote in from Grant, saying:

“WHNT,
I wanted to share this photo with you. The clouds were absolutely beautiful and after taking a few pictures, I looked up and noticed the rainbow colors within the clouds, which added to how stunning they were already. You`ll notice the rainbow colors slightly left of center in the picture.  This picture was taken right around 3pm today on top of Grant.”

The rainbow colors within the clouds are known as a circumzenithal arc.

Circumzenithal arcs are  rare sight. It looks like an upside down rainbow, or is often described as a smile in the sky. These arcs form when the sun is lower on the horizon, when the light can be refracted just the right way to produce this colorful effect.

According to Atmospheric Optics (www.atoptics.co.uk/) the circumzenithal arc is produced when downward solar rays move through plate ice crystals in such a way that the rays enter the uppermost horizontal face and leave through the vertical side face.

There was something even more rare than that Sydney Baker captured in Northeast Alabama Thursday afternoon: a Parry Infralateral.  These bright features appear to the lower left and right of the Sun, and just like the other optical phenomena, it’s caused by light refracting through ice crystals.