The hurricane already made landfall three times on Sunday, September 1.

At 12:45 p.m. Sunday, the National Hurricane Center confirmed Hurricane Dorian made landfall in at Elbow Cay, Abacos in the Bahamas.

The NHC said to expect wind gusts over 220 mph, storm surges of 18-23 feet, and some waves even higher.

The 12:45 statement reads as follows:

Data from an Air Force Reserve Hurricane Hunter aircraft and satellite data indicate that Dorian made the first landfall at 11:40 am CDT  in Elbow Cay, Abacos. The maximum sustained winds at the time were measured at 185 mph with the minimum central pressure falling to
911 millibars.

Dorian made a second landfall at 1:24 p.m. on Great Abaco Island near Marsh Harbor. Winds increased to 185 mph, which according to the National Hurricane Center is “tied for the strongest Atlantic landfall on record with the 1935 Labor Day Hurricane”.

An updated statement said the storm was “heading with all its fury toward Grand Bahama.”

The eye of #Dorian has made a second landfall at 2 pm EDT (1800 UTC) on Great Abaco Island near Marsh Harbour. Maximum sustained winds were 185 mph at the time. This is tied for the strongest Atlantic hurricane landfall on record with the 1935 Labor Day hurricane. pic.twitter.com/O9hrotTTbS

Hurricane Dorian’s third landfall occurred at 10pm CDT Sunday as the center of the eye crossed over the eastern end of the Grand Bahama Island. Maximum sustained wind speeds at that time were 180 mph, and the central minimum pressure was 914 millibars. 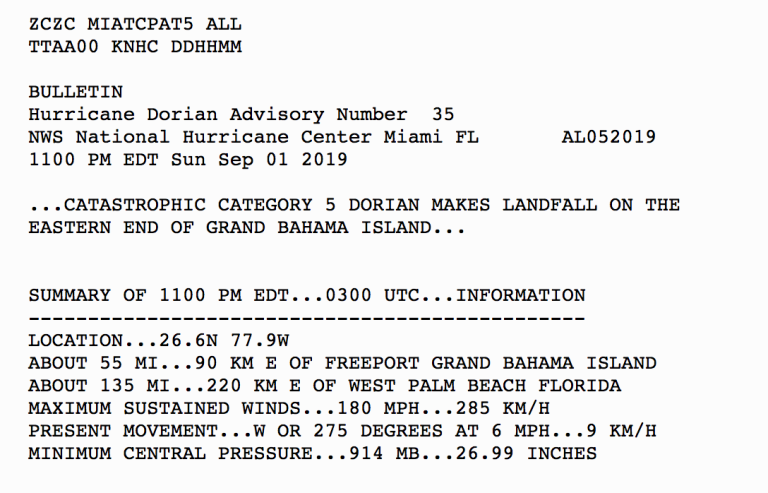 Hurricane Dorian continues to be an incredibly powerful storm and has not shown any real signs of weakening. Dorian will slowly traverse over the Northern Bahamas over the next 24+ hours as it begins to slowly stall east of Florida.

Beyond that, this system will recurve to the northeast. Exactly when it does that will greatly determine the overall impacts Dorian will have on Florida, Georgia, and the Carolinas.

In north Alabama, hot and dry conditions will continue over the next several days. Click here to read the latest WHNT News 19 forecast discussion.

Let's hope April is a little drier. January through March dropped almost 30" of rain at Huntsville International Airport as of Tuesday morning. We may pass 30" for 2020 once Tuesday is said and done. Historically April is a little drier with 4.32" on average. Of course the bigger story is the threat of tornadoes. April is the peak month for tornadoes across the Tennessee Valley. Here is a look…

A steady rain and a chilly breeze!

Severe storms are possible over South Alabama (Mississippi, Georgia and NW Florida, too) on Tuesday. (Traveling to that area? Visit our sister stations in Birmingham (CBS 42), Mobile (WKRG), Dothan (WDHN), and Columbus, GA (WRBL) for severe weather info in those respective cities).

Why not here? Mainly because of the cooler air coming in! The unstable air closer to the Gulf Coast fuels some heavy storms with hail, high winds, and a threat of tornadoes. Around here, it’s just too stable because of the chilly air.

As of Tuesday, Huntsville International Airport reports the eighth-wettest March on record. If we get the expect 1.0" to 1.5" of rainfall through Tuesday, we'll move up the list a bit:

A Cool Rain Tuesday – Severe Weather To Our South This Time

Rain returns Monday night into Tuesday. This time will be a cold rain and a possible storms opposed to severe weather. Wet weather overspreads the Tennessee Valley tonight into Tuesday with high temperatures only in the upper 50s to near 60 for the afternoon. Severe Weather Across Central & South Alabama With the storm track further south, we won't have severe weather this time. That will be across the southern…

Can coronavirus infect you through your eyes?

Over 800 Chicago police officers, employees call out sick in one day

Walmart to begin temperature checks for employees in US stores

Dolly Parton reading to kids from the Imagination Library