One of these things is meteorologically incorrect, even though they have been used in various weather headlines this week. Can you guess which one it is?

That’s right: “land hurricane” is a phrase of “bad meteorology”, and let me explain why. The feature that is present in this image is known as a mid-latitude cyclone. 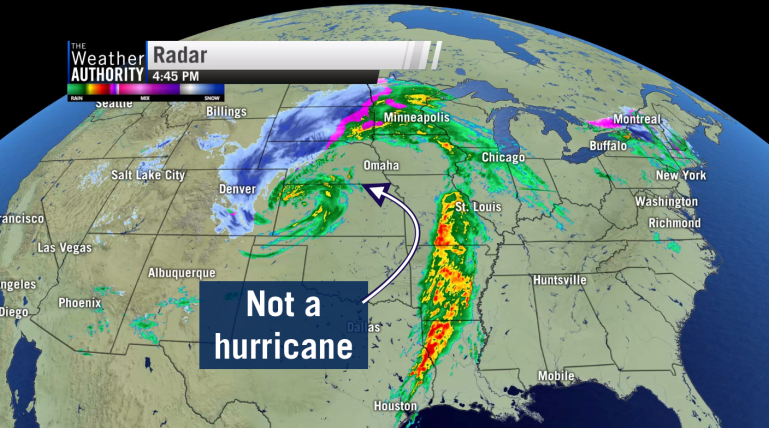 All cyclones (including hurricanes) are areas of low pressure, but you shouldn’t compare mid-latitude cyclones to tropical cyclones because the two are not analogous.

Hurricanes form in the tropics because they are barotropic

True tropical cyclones — like hurricanes — form in areas of little to no temperature changes; this is known as a barotropic region. Notice that there are no cold fronts or warm fronts in the tropics: The weather remains warm and humid, year round. Instead, the driving force behind hurricane formation is the latent heat that is released when warm, humid air condenses into the tropical clouds and storms that we see forming over the ocean.

As tropical storms and hurricanes form and move away from the equator, they receive their “spin” from the Coriolis force. What is the Coriolis force? It’s an apparent force that occurs when air moves from high to low pressure in the northern hemisphere; the air is deflected to the right due to the Earth’s rotation on its axis. The faster the air’s speed and the higher the latitude, the stronger the Coriolis force — and the greater the “spin” within the tropical storm or hurricane. 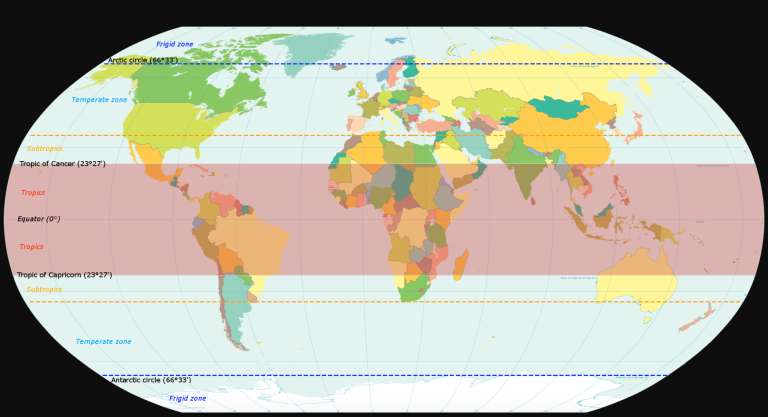 Mid-latitude cyclones form in higher latitudes because they are baroclinic

A mid-latitude cyclone is a fancy way of describing a low pressure system that formed in latitudes higher than those found in the tropics and south of the Arctic circle (in the northern Hemisphere, these would be the latitudes between 23.5 degrees north and approximately 66 degrees north).

At this point, temperatures are not consistent: They can be very warm or very cold, and they can also be very changeable. This is known as baroclinicity, where the atmosphere is dominated by distinctly different temperature air masses or temperature gradients. Along the temperature gradients, very strong pressure gradients can form, with air flowing from warmer areas to colder areas, and vice versa. Along this flow, strong low pressure forms at the surface. In the warm air sector of the low, heavy rain and thunderstorms form; in the cold air sector, heavy snowstorms and blizzards can form.

Remember the Coriolis force? It’s definitely in play during mid-latitude cyclones! As the center of the low pressure system travels higher in latitudes, the Coriolis force’s influence on the air flow increases, and the overall system can produce a spiral that is reminiscent — but not the same — as what we see in hurricanes. 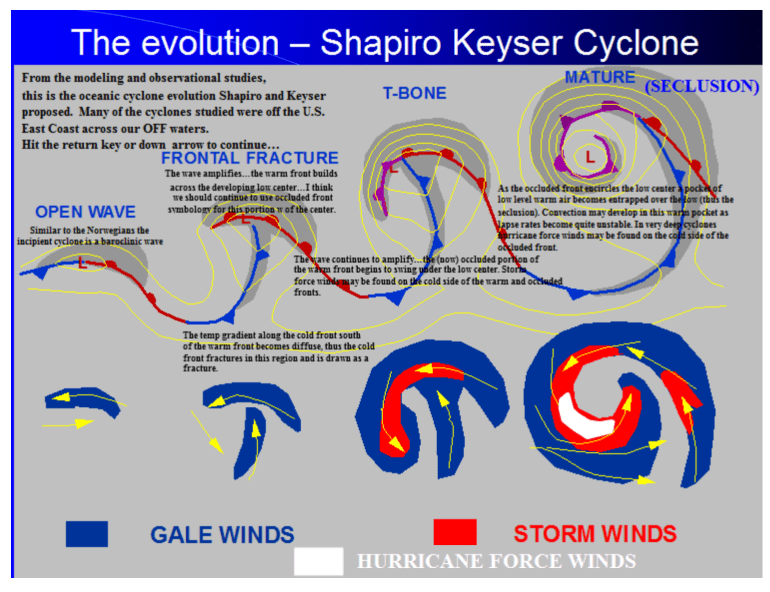 (MORE: The ‘bomb cyclone’ is nothing new: They happen in the fall through spring)

“Bombogenesis” describes  the rapid development and strengthening of a mid-latitude cyclone, and it is defined as a drop of at least 24 millibars in central pressure within 24 hours (in the case of this early January 2018 storm, it is forecast to drop as much as 40 millibars as it moves up the Eastern Seaboard). Meteorologists note that a low is “bombing out” when it gets close to or reaches its peak strength, or minimum pressure. 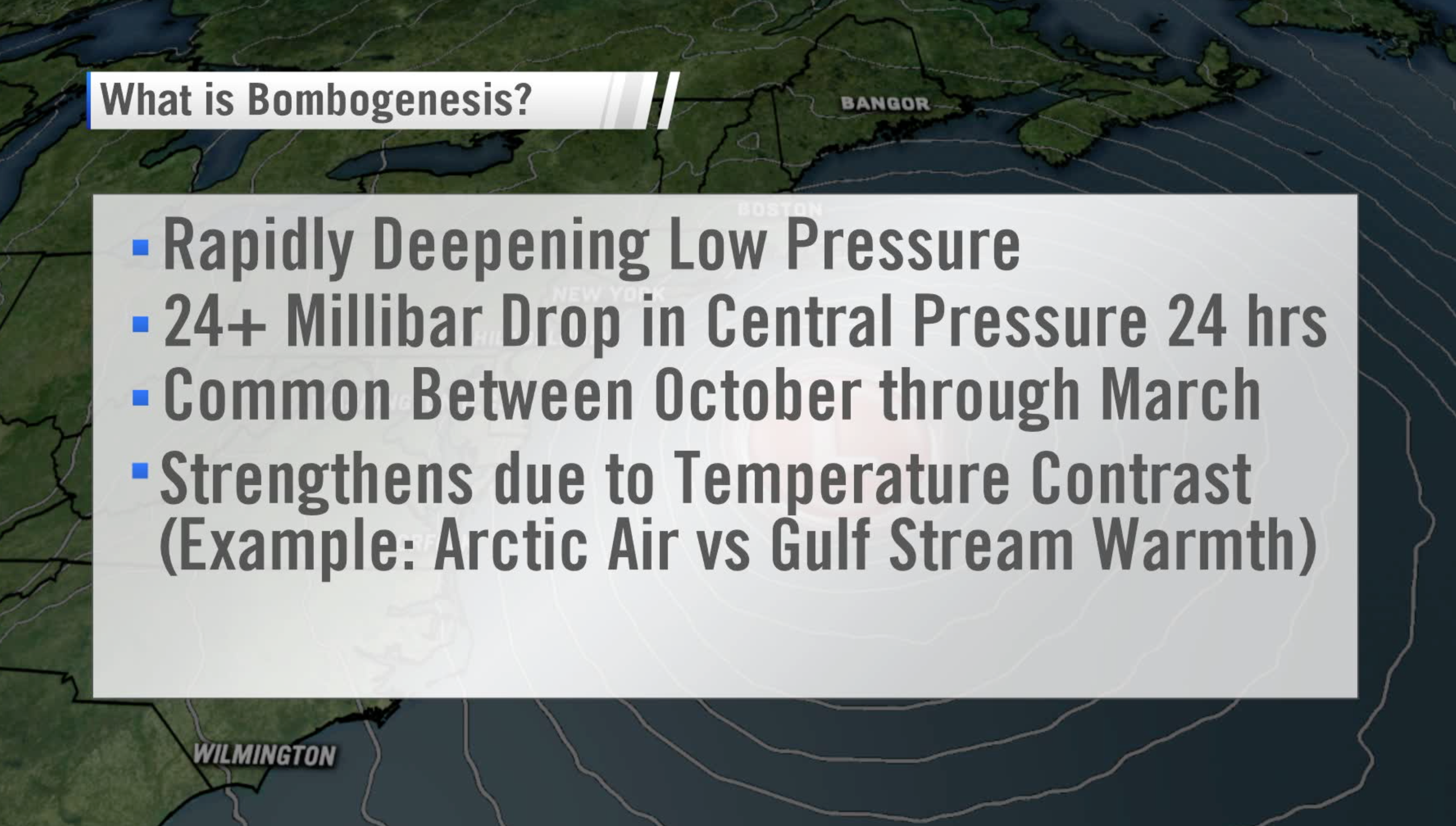 While it seems that in everyday language, a “blizzard” is synonymous with a winter storm, there are distinct criteria that are required to be met for a storm to be considered a blizzard, according to the National Weather Service:

According to the National Weather Service, earlier definitions also included a condition of low temperatures, on the order of 20°F or lower 10°F or lower (severe blizzard).