There’s an old wive’s tale (or what we sometimes just call ‘weather lore’) about the number of ‘big fogs’ in August giving you a clue as to how many times it will snow in the upcoming winter.

It’s fun to count and watch and compare, but there is no science to back this up at all!

It turns out that fog is a very localized weather ‘event.’  A thick fog at your house doesn’t always equal a thick fog for the rest of the region.  In fact, those very widespread fog days are pretty rare!

A broad, regional area of fog usually doesn’t occur until we’ve had a good soaking rain followed by a cool front.  Those are the days (nights) when it’s foggy from one end of the state to the other!

What we often get in August comes along river valleys and in places that had a heavy afternoon storm the previous day: wet ground, cool night leading to fog.

So has this idea of a fog-to-snow forecast ever worked?  There aren’t very good records of this kind of thing, so there’s a chance that a random year at a random place this worked.  I wouldn’t count on it, though!

Early August is a little too early to start lobbing predictions – even broad-brushed ones – about the winter season; however, it’s hot.  It’s been hot.  It’s going to be hot, and most of us would like to at least think of something cooler!

Summer 2019 (including May) has been a little hotter than ‘average,’ and we’re on pace for a higher-than-normal number of days in the 90s.  Through August 2nd, Huntsville International had recorded 47 days at or above 90ºF this year (top 30% of years).  There’s no correlation to hot summers and cold winters, by the way!  This just sets up the look forward using one of many factors: computer modeling. 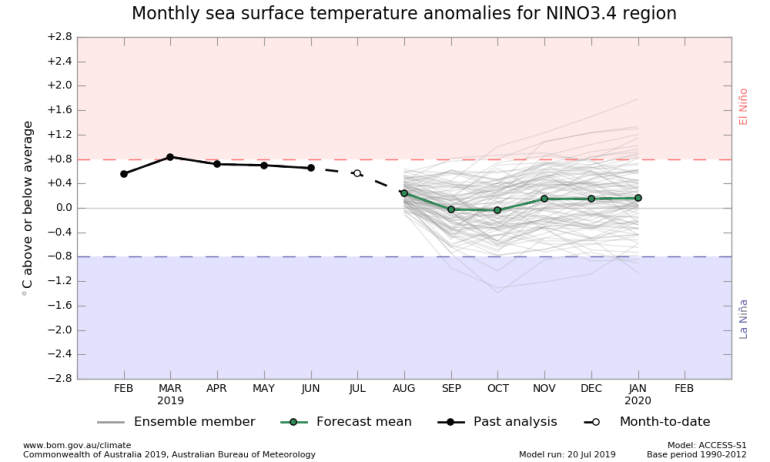 El Niños typically bring wetter, stormier and cooler winters to Alabama and Tennessee; La Niñas tend to be drier and warmer, and ‘neutral’ ones tend to be wetter than average with some wild swings back and forth between warmer periods and colder periods.  (Sounds somewhat like a usual winter around here, huh?)

Another computer-derived forecast comes from the CFSv2 (a seasonal forecast model run by NOAA).  It’s suggesting the kind of setup that can deliver quick shots of cold weather followed by quick warm-ups; however, slight adjustments in the real-world set-up can mean huge changes here!  That’s why it’s an outlook and not a forecast.

The images shown here paint a ‘warm’ picture for Alabama and Tennessee, but that warmth is relative to the average, and with that big area of red on the temperature map and yellow/orange on the 700 mb map around Alaska can be a signal for some substantial cold outbreaks in the East.  Does that mean us?  Maybe, and maybe not.  There’s no skill in being specific this far out, but if you like cold weather – and wintry weather – that’s what you’d like to see!

So don’t count on the fog.  Don’t bet on the persimmon seeds or wooly worms.  All of those things are fun, and we’ll talk about them from time to time.  The best forecasts are the ones for the shortest periods in the future; the long-range stuff is broad, lacks detail, and can give you a lot of false hope if you are a hungry snow bird who hasn’t been fed in a few years!

She jumps for joy every year on the first day of school, this back-to-school mom is back at it!