We’re too far out to know if this is going to set up to be a substantial severe weather outbreak or not, but there are some long range signals we often look at to determine if severe weather is possible, and those signals are showing up right now.

The CIPS (Cooperative Institute for Precipitation Systems) analogs uses long range model data and compares the forecast pattern to past patterns, and shows how often severe weather occurred when the pattern looks like what it’s forecast to look like by the model. 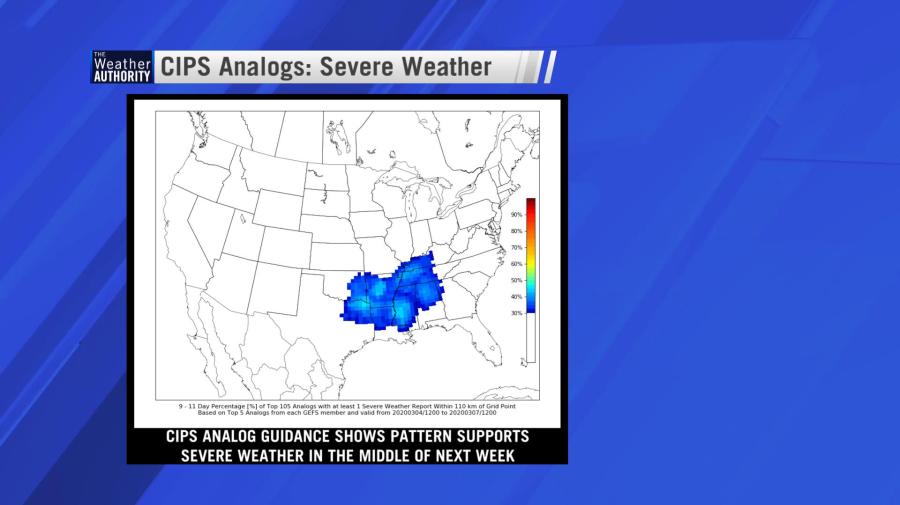 The latest analog is showing that we’ve seen severe weather before with this kind of a pattern. We’ll have to see how these probabilities change as we get closer in to the event. Keep in mind a long range model isn’t all that great at getting specifics right, just a general pattern, so this isn’t a cut and dry, set in stone area that will see severe weather. We’re just taking note that it’s showing something at this point.

These are a little less intuitive to look at for those unfamiliar with them, but this is a way to look at the CFS (Climate Forecast System) model runs and quickly see how the chance for severe weather across the US looks like from run to run. 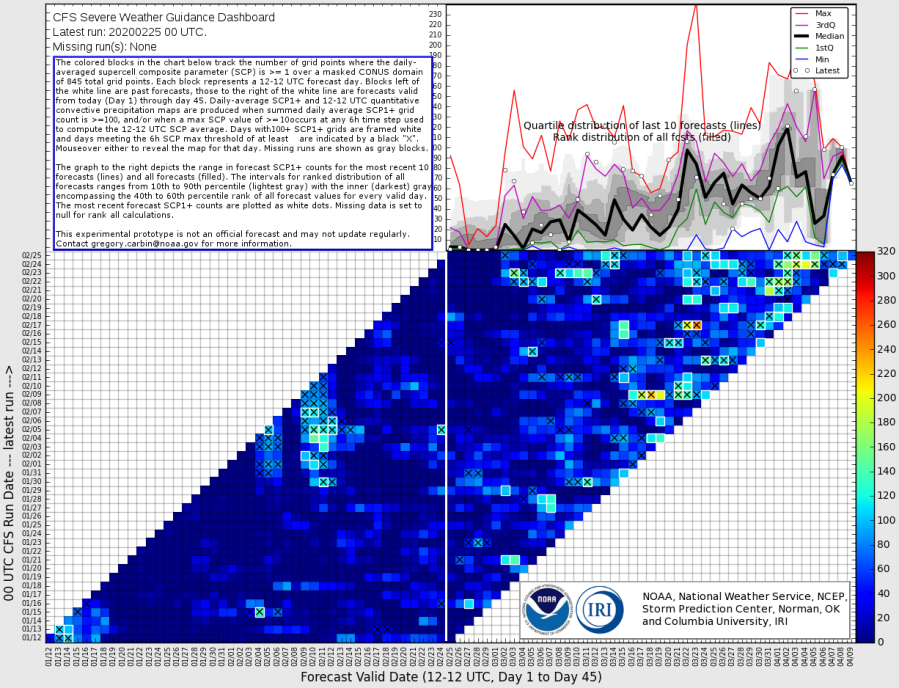 I don’t expect you to necessarily pick up the severe weather threat on this chart, but know there’s a signal there. Another thing we can see on this chart is that there will likely be more chances for severe weather through March and into early April across the country. Of course, that’s usually a given as March, April, and May are the busiest severe weather months in the U.S.

As it stands right now, we have some indications there could be some severe weather across the south early next week, including Super Tuesday and the Wednesday after the election (Models have trended more towards Wednesday for storms in north Alabama). Whether or not a significant severe weather threat is realized, or exactly where the threat would be highest is still way too far out to know about for sure. But, this is just that first tap on the shoulder to let you know that we could be dealing with some active weather next week, and to make sure you pay attention over the next week as we fine tune things.

A few clouds are floating by overhead the Tennessee Valley, and cooler, drier air has settled into the region.

Morning lows will fall into the upper 40s to low 50s Monday, and a few areas of fog are possible near the Tennessee River and its tributaries.

Songwriter of ‘I Love Rock and Roll’ dies of COVID-19

3 dead from COVID-19 in Alabama, all from north Alabama