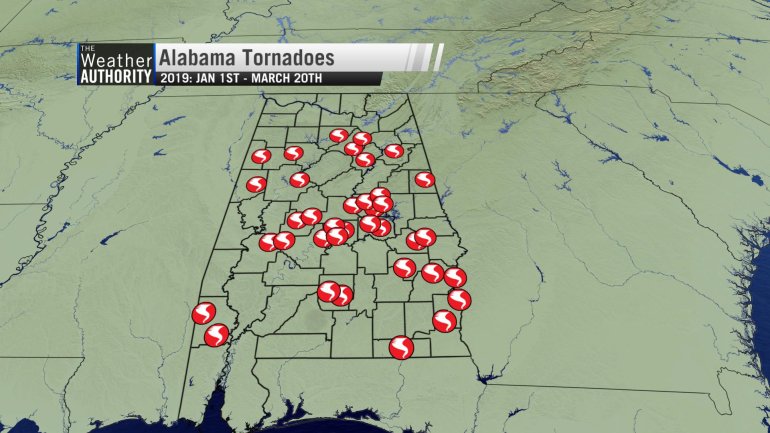 We say it often: severe weather can occur at any time of the year in Alabama. The first few months of 2019 are proof of that; 37 tornadoes were recorded in the state before the official start of spring (March 20th). 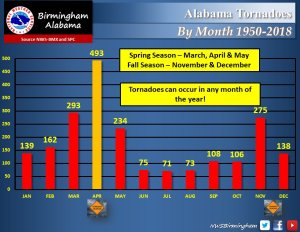 If that sounds like a lot, it is. The average number of tornadoes through the months of January, February, and March is closer to 8-9 in a given year.

The active start to this year’s severe weather season could be attributed to the warmer start to the year. When the weather becomes more spring-like earlier in the year, it follows that springtime weather patterns capable of producing tornadoes could start occurring earlier too.

Another possibility is that the weak El Nino that’s currently underway is aiding severe weather in south and central Alabama. Research has shown a correlation between El Nino years and higher tornado occurrences in Alabama. Simply put, El Nino is the warming of pacific ocean waters. That warming can create heat and energy that gets transported eastward toward the Gulf coast, where it can contribute to storm development.

The bottom line is this: An active start to the season is not always indicative to an active season overall. It is however proof that you should be ready for severe weather every month of the year.

The following links will provide additional information on severe weather safety and preparedness:

A break in the rain will occur overnight into early Saturday morning as a warm front lifts north from Birmingham into Middle Tennessee. Temperatures will rise through the early morning hours into the upper 50s to low 60s at daybreak Saturday.

With a warm and humid airmass in place, a few scattered showers and storms are possible for Saturday afternoon, though this rain will be more hit-or-miss instead of widespread and continuous. Afternoon highs will rise to the upper 60s to low 70s on Saturday.

HUNTSVILLE, Ala. - The NOAA Weather Radio Transmitter in Huntsville (KIH20 on 162.4 MHz) will be offline for some time.

The National Weather Service said a part on the antenna failed and won't be able to be replaced for three weeks.

How do you negotiate your salary in an uncertain economy?