Will the Spring blossoms last through an unusually cold weekend?  A chill like this is not unprecedented, but it sure is out of the ordinary.

The wind prevents widespread frost early Saturday and pushes the “feels like” temperature down as low as 25ºF to 30ºF between 4 and 8 AM. Even with a fully sunny sky Saturday will feel more like the end of February than the second weekend of April.

Check the video update for the areas with the best chance of frost and a look ahead at a fast warm-up: 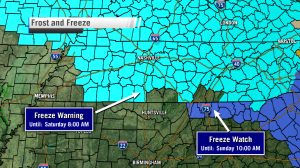 The National Weather Service in Nashville has posted a Freeze Warning for most of Middle Tennessee tonight:

“LOW TEMPERATURES WILL FALL INTO THE UPPER 20S TO MID 30S EARLY TOMORROW MORNING ACROSS ALL OF THE MID-STATE. IN ADDITION…SIMILAR TEMPERATURES WILL BE POSSIBLE SUNDAY MORNING ON THE CUMBERLAND PLATEAU AS SKIES CLEAR OUT AND WINDS RELAX.”

Even some snow is coming down in the Smokies!

Your eyes do not deceive you; the forecast lows for Sunday morning in North Alabama and Southern Tennessee have come up over the past few days. Fortunately for most gardeners around North Alabama, the coldest air moves out in time to prevent a widespread frost or freeze on Sunday morning. There is still a decent chance that the usual cold spots could briefly dip to the 31-33ºF range Sunday morning especially north and east of Huntsville.

This is nowhere near “record” cold, but it is very unusual.  The normal range of temperatures in early April is about 8ºF either side of the seasonal average.  Saturday’s 10-20ºF below average is way out of the norm, but it was much colder than this back in 2007 on Easter Weekend (it snowed some on Good Friday that year, too):

Keep up with the latest projections on the cold weather this weekend and our rainy, stormy start to next week on WHNT.com and with Live Alert 19 and the WHNT News 19 App!

Rain/sleet mix moves out, sunshine on the way!

An upper air low swirling over Arkansas, Tennessee and northern Mississippi kicked off a batch of showers Tuesday afternoon: some rain and some sleet mixed together!

Temperatures are far too warm at the surface for any major problem, but you may be wondering how in the world we can get frozen precipitation when we're in the fifties (Huntsville's high today was 53ºF).

March in like a lamb, and it stays that way for a while!

You know the old saying about March: in like a lamb, out like a lion (or vice versa).

Sunday night's rain and storms led the way for a quiet start to the month of March; colder air blowing in dropped the temperature nearly thirty degrees in twenty-four hours: from 75ºF at 3:45 PM Sunday to 46ºF at 3:45 PM Monday.

The Tennessee Valley experienced a very warm and very muggy weekend for the final days of February, with afternoon highs reaching 75 degrees in Huntsville and 79 degrees in Muscle Shoals on Sunday.

However, a cold front pushing through the Southeast is bringing the region back to reality Monday, and temperatures will drop a whole 10 degrees from the upper 50s Monday morning into the upper 40s through the afternoon!

‘Symbol of hatred’: No charges after KKK flag hangs next door to Black family’s Michigan home