The start of next week will bring a complex weather pattern to the Central and Eastern US, and our forecast has a lot of moving parts beyond this weekend. A subtropical low is expected to develop into a subtropical depression or storm over the weekend. An upper level low cut off from the steering flow in the upper levels will drift across Texas, and a trough will start to dip south from the Midwest. 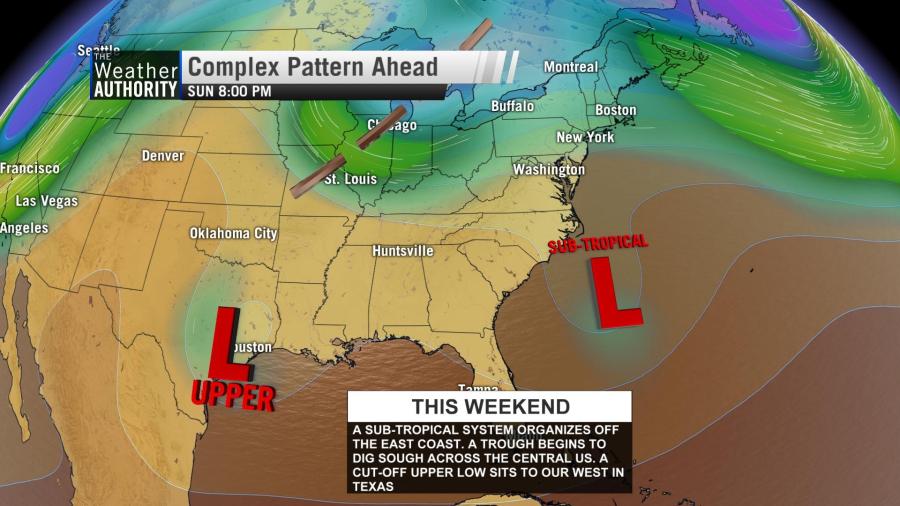 Here in the Tennessee Valley, we will be between all of it, underneath a ridge of high pressure. This ridge may weaken a touch through the weekend, leading to the chance for a few scattered showers and storms. Temperatures will trend a touch above average for this time of year, in the mid 80s Saturday and Sunday. 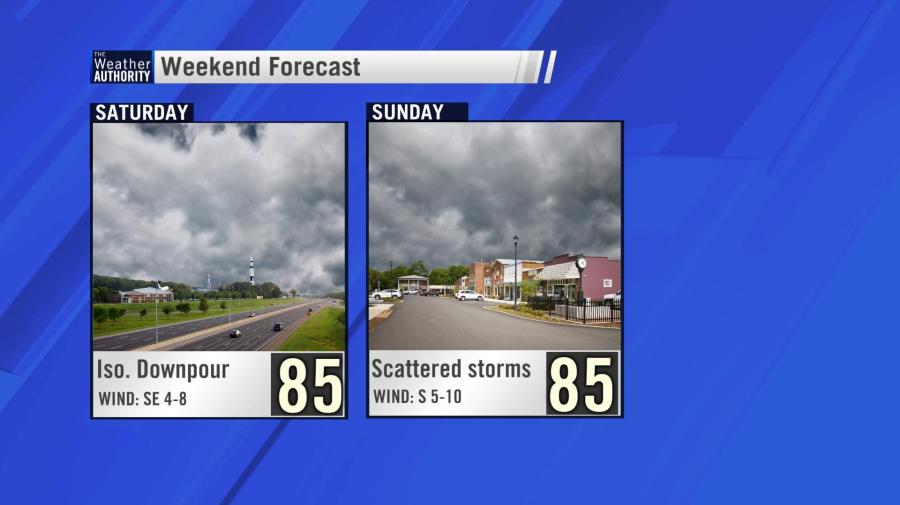 As we head into the start of next week, exactly how these pieces of the forecast puzzle behave is still a bit up in the air, but we know the subtropical system will lift northeast and be absorbed into the jetstream. The trough will continue to dive southeast, bringing cooler air to the Eastern US. The upper level low in Texas could drift into the Gulf and re-emerge across the Central Gulf Coast, or drift more easterly. Either way, this could aid in rain chances Sunday and Monday. 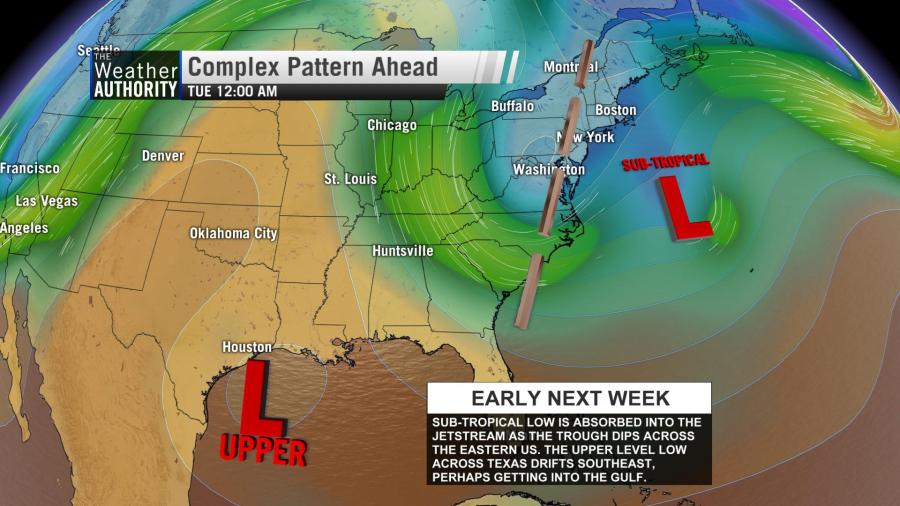 Based on the most recent data, it appears that both the eastern trough and upper low will undercut the ridging in place next week, thus temperatures may again actually dip below average rather than trend above average like we initially thought. Often, an east coast storm like the one forecast next week leads to above average temperatures and dry weather here, but this time, it looks like we may get cool again. If we were to stay overcast Monday and Tuesday, we could see high temperatures well below 10° below average. That’s cool, but we aren’t talking frost. Just cooler than average. As for now, we’re taking a cooler approach to Monday and Tuesday, but not quite that cool. In the long range, we still expect above average temperatures.

Ridging is expected to build back in by the second half of next week, which would lead to a drier and warmer pattern. Our long-term forecast is still on track for May, but we may see one more round of cooler and damper weather before the summer pattern sets in.

Zeta got beat up overnight crossing the Yucatan Peninsula. Winds are at 70 mph as of Tuesday morning at 4am. The system will strengthen in the Gulf of Mexico later today. Zeta moves across the Gulf of Mexico later today into Wednesday as a hurricane. It's still expected to make landfall across Louisiana late Wednesday. IMPACTS ARE THE SAME! It just depends on the exact track of Zeta as the…

Zeta was upgraded to a Category 1 hurricane in a special advisory from the National Hurricane Center.

Zeta now has more symmetric strong convection (thunderstorms) around the center of the storm, and has shown some fairly quick strengthening today. Winds have increased fairly quickly, and pressure is dropping pretty fast too. Zeta moves across the Yucatan Peninsula Tuesday morning, re-emerging into the Gulf of Mexico as a strong tropical storm or hurricane.

Zeta’s Impacts on North Alabama Depend On Track

Hurricane Zeta continues to organize and intensify this morning southeast of the Yucatan Peninsula. As of 1 am, it had sustained winds of 75 mph and a minimum central pressure of 982 millibars.

The storm will continue to move northeast through the Gulf towards the Northern Gulf Coast by Tuesday night into Wednesday morning as either a hurricane or a strong tropical storm. You can keep up with the latest track of Zeta with our interactive map below:

‘Out on the town’: 200-pound tortoise back home after escaping Alabama pen