We’re currently in the middle of a very run-of-the-mill kind of summer in Alabama; no long-term drought has tried to develop and we haven’t had to deal with any record-breaking heat waves. Huntsville recorded the hottest temperature of 2019 (so far) back on July 8th at 98°F, while most record high temperatures this time of year are at least 100°F+. 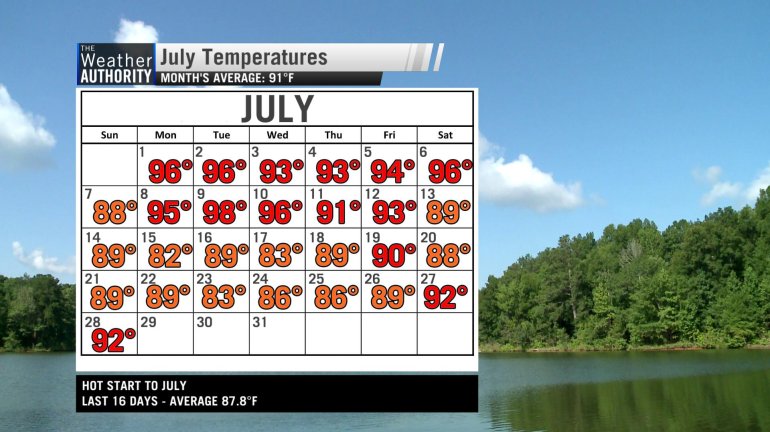 We are now heading into what is climatologically the hottest part of the year, and in fact some of the hottest temperatures ever recorded in the Tennessee Valley occured on this day – July 29th – back in 1930 and again in 1952.

In 1930 the hottest temperature ever recorded in the Shoals occurred, when temperatures hit 108 degrees; those temperatures occurred on July 28 as well as July 29. Then in 1952, another heat wave took place in late July, producing temperatures that rocketed up to 106 degrees in Huntsville – again on both July 28 and July 29. 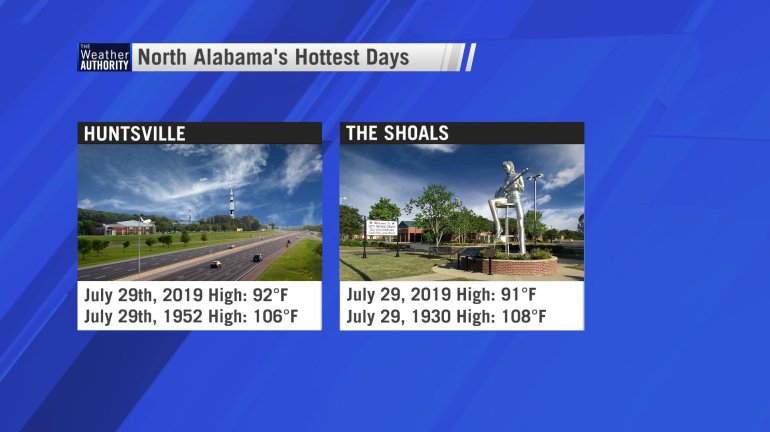 We should also note that more recently, in 2012, Huntsville hit 106 again during a June heat wave, tying the previous record that had been set on July 29th of 1952.

We don’t see that kind of heat in the near future, but summer isn’t over yet! It’s not uncommon for Huntsville to hit 100°F once or twice in a given year, and we still have plenty of time for it to happen this year.

You can keep up with your local forecast at our forecast discussion page here: WHNT.com/forecast

Cool Weather Continues Into Next Week

Things stay fairly cool this week. Temperatures make it into the 70s Tuesday before another cold front brings another round of cold air. We'll have to look out for a frost through mid-week. There isn't much rain in the forecast either. Outside of a stray shower, things look fairly dry.

It's pretty easy to pick out that mid-week cold front in our high temperatures next week. That front pushes through Tuesday night. Behind it, another shot of cold air moves in, with temperatures as much as 15° below normal. We'll have to keep an eye out for some late-season frost Thursday and Friday mornings.

When planning a spring/summer garden in the Tennessee Valley, it's helpful to know the rule of thumb regarding the last frost of the season!

‘Cool’ for a while means no big storms for now!

It's mid-April. There's an anniversary of a major tornado just about every day this time of year. It's the height of tornado season.

But it's not doing anything like that now. How long can we luck out?