TENNESSEE VALLEY - Plan to be out at night?Be sure to look for the five bright planets all month long. 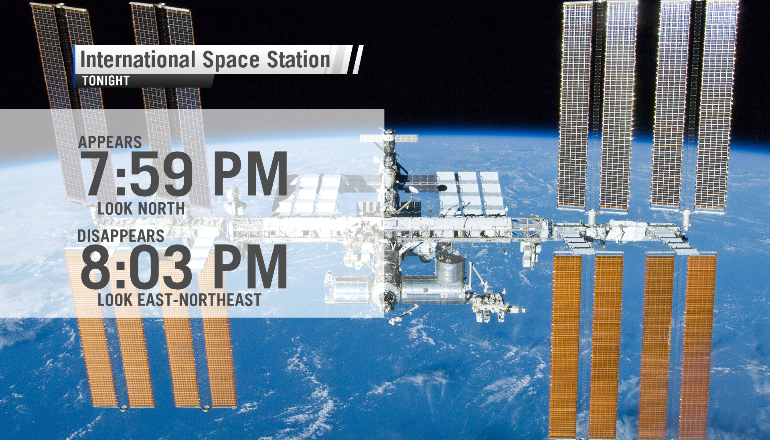 BONUS: If you look up at the correct time, you may also be able to spot the International Space Station as it flies over our area of Earth.

For the Northern Hemisphere, Mercury will put on a good showing in the western evening sky after sunset for several weeks.

Click here for recommended almanacs; they can give you Mercury’s setting time in your sky.

After appearing as a fiery red light in our sky last May and June 2016, Mars is now a fading ember of its former self. Look for Mars rather low in the west as soon as darkness falls. Mars is edging closer to the sunset day by day. It’ll disappear in the twilight glare in a month or two.

From mid-northern latitudes (U.S. and Europe), look for the red planet Mars to set in the west roughly an hour after nightfall in early April and around nightfall by the month’s end.

Jupiter in the eastern sky

Jupiter reaches opposition on April 7 and comes closest to Earth for the year on April 8. Thus, this month, Jupiter shines at its brightest best for all of 2017.

Watch for a full-looking moon to join up with Jupiter for several days, centered on or near April 10, just a few days after Jupiter’s opposition date. See the above sky at the top of this post. Wonderful sight!

From mid-northern latitudes, like those in the U.S. and Europe, Jupiter rises at dusk or nightfall in early April. By the month’s end, Jupiter is seen above the horizon at dusk.

If you have binoculars or a telescope, it’s fairly easy to see Jupiter’s four major moons, which look like pinpricks of light on or near the same plane. They are often called the Galilean moons to honor Galileo, who discovered these great Jovian moons in 1610. In their order from Jupiter, these moons are Io, Europa, Ganymede and Callisto.

Saturn late at night through dawn

Saturn is getting close to its June 15 opposition and is beginning to shift over into the evening sky.

But your best view of Saturn, from either the Northern or Southern Hemisphere, is still during the dark hour before dawn. That’s when Saturn climbs highest up for the night.

Saturn, the farthest world that you can easily view with the eye alone, appears golden in color. It shines with a steady light.

Binoculars don’t reveal Saturn’s gorgeous rings, by the way, although binoculars will enhance Saturn’s golden color. To see the rings, you need a small telescope. A telescope will also reveal one or more of Saturn’s many moons, most notably Titan.

From mid-northern latitudes (U.S. and Europe), Venus rises about one hour before the sun in early April and nearly two hours before sunrise by the end of the month.

Click here for an almanac giving rising time of Venus in your sky.

The information in this article originally appeared on EarthSky.org.

Fall is right around the corner! The official start of the Fall season comes Tuesday morning.

Through this week, temperatures look to hover around or a little below average. Highs will be in the 70s and low 80s. Some of the coolest weather of the week will be as some clouds and rain associated with Beta moves through around the middle of the week.

Beta remains a heavily sheared and disorganized storm in the Gulf this morning.

This storm is expected to slowly move west towards the Texas and Louisiana coast through the early week, but some rain will extend eastward from the storm and bring some occasional rain to the Mississippi and Alabama Gulf coast as well.

Accumulated Cyclone Energy (A.C.E.) is a great way to measure the activity of a hurricane season. It takes into account the total amount of energy produced by storms, rather than just counting the number of storms or hurricanes. A.C.E. tends to be a great way to cut through seasons that might have a lot of named storms that aren't very strong, or a season with several short lived storms, and provide a better overall view of how active the season was. Just a few short weeks ago, A.C.E. in the North Atlantic basin was running fairly close to average, despite the massive amount of named storms. But recent storms like Laura, Sally, Paulette, and Teddy have produced a tremendous amount of energy, catapulting our A.C.E. so far in the North Atlantic this year over 20 units above normal.

We're actually running below average in the whole Northern Hemisphere though. That's because things have been very quiet in the usually very active Northwest Pacific and the Northeast Pacific.

Scammers are exploiting this PayPal policy to rip off online shoppers, BBB says

College Students: Watch Out for These Six Scams!

Huntsville Army Veteran passes away, leaves legacy of service to the community

Huntsville Army Veteran passes away, leaves legacy of service to the community