It’s not uncommon to go several years without a 100-degree day in the Rocket City.  Some decades have many 100s; some have very few in the record books going back to the early 1900s.

So we had been over three years without hitting 100ºF at Huntsville International Airport until Monday afternoon.

Will we do it again?

Temperatures soar into at least the middle 90s Tuesday afternoon, and those who stayed completely dry today and remain that way on Tuesday could squeak out another 100-degree temperature by mid-afternoon.

The odds of any one spot being doused with a downpour on Tuesday and Wednesday are only in the 20% to 30% range.  In other words, most of us will miss the rain, but it will come down hard and fast on those who are lucky enough to catch a thunderstorm.  The chance of afternoon and evening storms increases later in the week, and the outlook is good for almost all of North Alabama to finally get a healthy rain by the end of the weekend.

Chance of rain increasing: The worst thing about a ‘rain chance’ is that it literally is what it is: a description of something that ‘might’ or ‘could’ happen. 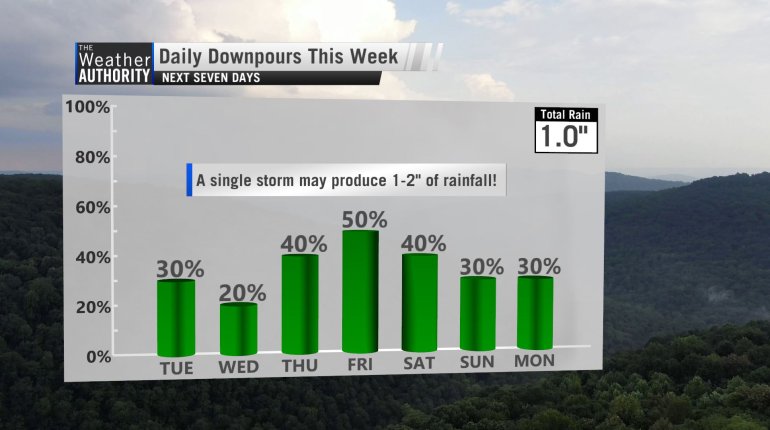 At no point in the next seven days do we see a guaranteed rain for any one spot; however, the number of daily thunderstorms increases later in the week.  That means you can expect more storms scattered around here and there in North Alabama and Southern Middle Tennessee.  A weak cool front moves into the area Thursday and stalls Friday (hanging around through the weekend); it keeps daily storms stirred up but isn’t strong enough to bring steady, widespread soaking rainfall.

The additional daily storms will help drop the temperature some, though!  That’s great news.  Huntsville has been above 90ºF each afternoon for the past nine days.  Four of those days have been over 95ºF! 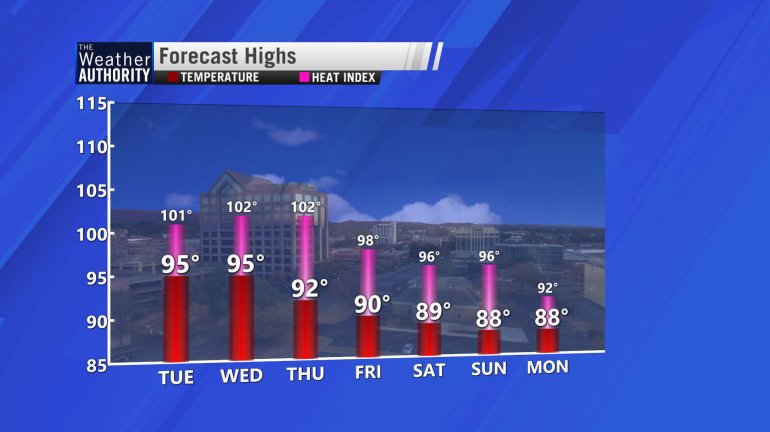