It was a frigid Wednesday morning with lows in the middle to upper teens across the Tennessee Valley.  Winds were up just enough to keep from a record low in Huntsville. We got down to 17° which is 1° off the record of 16° back in 1911. Here is a look at a short list of morning lows.

Here are a few more:

Winds Up – Not As Cold Air Temperature: (This what we had Wednesday morning – no record)

Winds mix the atmosphere at the surface and don’t allow the temperature to drop to the lowest point. That’s why we didn’t see a record low Wednesday morning in Huntsville. The downside to that, there is a wind chill factor. Those were in the single digits for some this morning.

The ‘heat’ radiates back into the atmosphere allowing the temperature to drop. The sky has to be mainly clear as well. This is called “radiational cooling” and temperatures can get to their lowest point in these conditions.

We haven’t been this cold since January 2018 where we had several mornings with lows in the single digits and teens. On the other end, we had all-time record highs of 100° less than a month and a half ago!

Look for a sunny and cool afternoon. It will still be chilly for November, but a big improvement from Tuesday. Highs today reach the middle 40s. 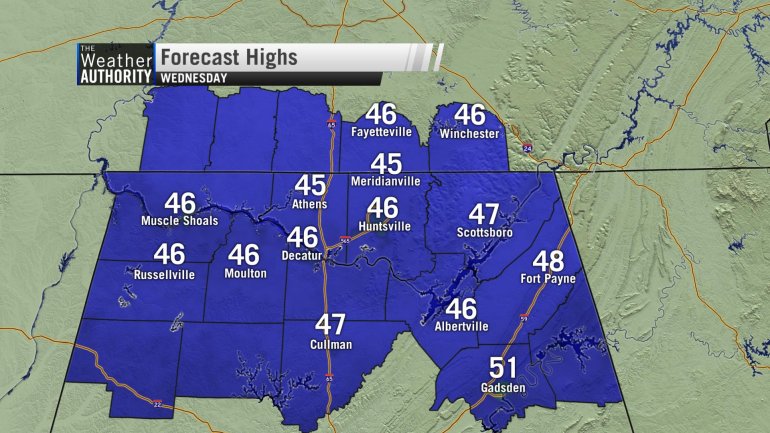 Quieter weather ahead for Tuesday

Huntsville hit 71ºF on Monday. Muscle Shoals made it to 75ºF ahead of the rain and storms. We won't be getting that warm again for a while, but Tuesday won't be half bad! The average high temperature in Huntsville on January 26th is 52ºF; we'll beat that by a solid 10 to 15 degrees Tuesday afternoon with partial sunshine and no rain before 5 PM.

Another storm system brings a chance of some showers after sunset Tuesday. That one has no risk of severe storms with it, and it will actually serve to draw some slightly cooler air south for the middle of the week.

The Tornado Watch has been canceled.

The heaviest storms will stay south of the Tennessee Valle through sunrise Tuesday.