Sunday/Monday front: The cold front we’ve all been waiting for is coming to kick off next week. Rain chances will increase Sunday and Monday, and while we do expect meaningful rainfall, it will by no means be enough to get us out of the drought we’re in.

Keep in mind that it is a model output, and it won’t get the numbers perfectly right. Most of us can expect some decent rain, but there may be a few folks who miss out on more than a quarter inch. Cooler air also moves in with this front. 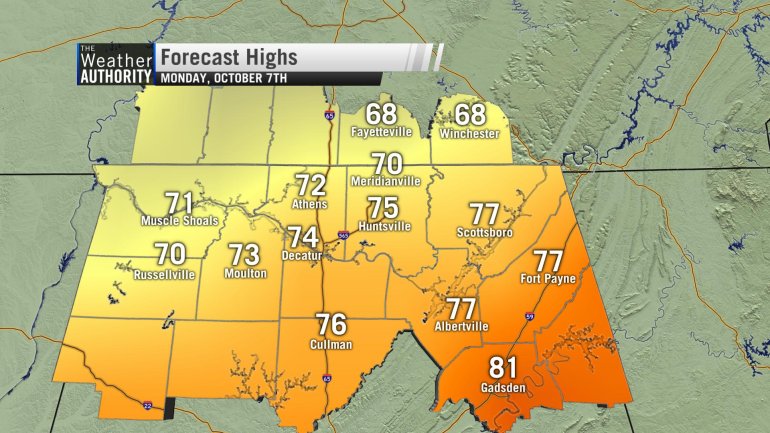 This will feel fantastic compared to what we have been dealing with. And there’s a reason to hope that we won’t warm up too much through the week. I expect some 80s in the afternoons, but no 90s.

A second cold front?: It sure looks like another cold front will move through at the end of next week.

This will again bring some showers and storms, and again bring in some cooler air too. It’s a bit early to say if the rain chances will be quite as good as the early week front, but there are some indications we might get even cooler behind the front. Let’s look at the ensemble data (an average of lots of models runs with slightly different starting conditions) to see how the model is performing with this second front.

The key to seeing how much uncertainty there might be in the models can be to see how wide those boxes and whiskers get. Keep in mind that this is a model, not a forecast. Don’t put too much weight on those numbers. With our first front, those boxes and whiskers don’t get too wide, but by the end of the week, that changes dramatically. Right now, it’s too early to say if the second front will bring a good shot of cool air or just barely register, but there’s certainly hope in another nice blast of cooler air towards the end of the week too.

One hurt in Limestone County shooting

Decatur’s Concerts by the River postponed another month

Body found in water near port of Decatur