HUNTSVILLE, Ala. (WHNT) -As the holidays approach, for some people it means it ’tis the season to be stealin’.

Thieves, scammers and con artists are already out in full force with one goal and one goal only, and that is to separate you from your hard earned money.

WHNT News 19’s Al Whitaker is Taking Action to expose what they do, how they do it, and how you can keep from being their next victim.

We think that’s a great thing. The only defense you have against these thieves is to know their game.

Michael Blakely got a call from someone claiming to be from a well-known and reputable sweepstakes, telling him he had won $5.5 million. He told them he knew it was a scam.

“One thing just led to another. We was arguing back and forth, and he told me, ‘I can be in your house and have you killed in 15 minutes and be gone and nobody will ever know it,’” Blakely said.

The call was traced to a number in Kingston, Jamaica. If you happen to win one of those major sweepstakes, they will not call you, nor will they ask for money to send you your prize.

In another scam, someone has been calling homes and businesses in the Decatur and Athens areas lately, demanding payment on overdue utility bills. Trouble is, it’s a thief. The utility companies don’t do that.

Joe Holmes with Decatur Utilities told us, “We will not call and demand that you make payment over the phone or by giving us your credit card information or require that you go out and get a prepaid card or ask for your checking account information. We do not do that.”

Holmes told us a few folks have fallen prey to that scam, and it’s sad when they come in, wondering why their power was disconnected. “That’s a sad situation. We try to work with those folks but the money’s gone and typically there’s no way to get it back.”

Some scams will be placed at your doorstep by an agent of the federal government. Some of the oldest scams on record are lies hand delivered by the Postal Service. We have a box full of mail sent by a thief – just to one Huntsville address over the course of just a few months. 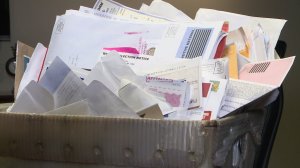 U.S. Postal Inspector Tony Robinson told us, “This is not uncommon. Usually when they answer or respond to one of these scammers, the scammers will sell their addresses and names to their buddies, and before you know it, everybody’s fishing trying to put this guy on the hook and this is a good example.”

Daphne Poague is one of those scam victims. “She told me that her son had passed away in a motorcycle accident just a couple of months before,” she said.

She says it just seemed like it was meant to be. The old suburban they have is a gas guzzler and the transmission is going out. It won’t go in reverse. Her husband, Chris, has stage-four cancer, and has already outlived what the doctors had projected. It took more than a year to save up about $1,500 from his disability checks and what money friends and family have given them to help them get by. He wanted to get her a car before he died.

When Daphne seemed reluctant to close the deal, the scammer explained she’d be protected by the eBay Buyer Protection Program. Another lie, but it was enough to convince Daphne to buy three $500 PayPal cards, and with that, their money was gone.

“I felt like I had let my husband down. Because he had wanted to make sure that I had a good, decent way of going in case something happened to him,” Daphen Poague told us.

These thieves don’t care what your situation is. The only thing they care about is taking your money.

And there’s nothing the police can do about it. They cannot get your money back.

The only defense you have against these people – is you.

You have to understand the IRS is not going to call out of the blue and demand money. Neither is the utility company, or the sheriff’s department, or that clearinghouse sweepstakes.

If you get one of those calls, hang up, it’s a thief.

And as for craigslist, there are a lot of good, honest people that use that site every day. But it’s also a great place to go to find a thief.

If you’re going to use craigslist to look for a car, you’d better know what you’re doing.

Chris Poague was having a pretty good day when Al visited him on Friday, but he doesn’t know how many more good days he has left. He’s under hospice care.

And if you want to know what kind of people did this, his wife told them what was going on and pleaded with them, “don’t just take our money.”

And they did anyhow.

All Chris wanted to do before he died was get his wife a car, and the thieves stole that. (BBB) - To help slow the spread of COVID-19, State Departments of Motor Vehicles (DMVs) around the United States, and the Registry of Motor Vehicles in Canada, have expanded their online offerings, allowing drivers to book appointments or pre-pay for services.

Unfortunately, scammers are using this opportunity to trick drivers with lookalike websites that steal money and personal information, according to new reports filed by consumers on BBB.org/ScamTracker.

(BBB) - The manager for a large commercial builder recently called her IT support with serious concerns. One of their clients received an email that at first looked like it came from her work email account, asking for payment on completed work, but it didn’t originate from her office.

The email address included her name, and the business domain was only one letter off. The sender asked for a wire transfer of payment for labor and materials on a large project costing almost a million dollars, and the recipient almost paid. This manager’s company has fallen victim to typosquatting, and they’re not alone.

(BBB) - Got your COVID-19 vaccine? Great job! But don’t share a photo of your vaccination card on social media. The self-identifying information on it makes you vulnerable to identity theft and can help scammers create phony versions.