HUNTSVILLE, Ala. - You may remember a couple of weeks ago, WHNT News 19 took action on the behalf of residents at the Huntsville Summit Apartments because of their faulty air conditioners. Well since that time, we've received a number of complaints from Summit residents who tell us the building is infested with bed bugs. So we went back to take action once again on the behalf of these residents, to make certain they can live in a pest free environment.

“The bed bugs are outrageous,” Sharon Fairley tells us. While some of the Summit residents we've talked to say they won't speak out publicly because they're afraid of being evicted, Fairley says they don't scare her.

“It is unbelievable. I was never told at the time and I’ve been here now two years, this is my third set of furniture because of the conditions of this place,” Fairley explains.

Fairley says they do occasionally treat an apartment or two, but she says they have yet to rid the building of the pests. In fact, she says it has only gotten worse since she's been here.

Ryan Kane says his mother is one of those afraid to speak out, so he doesn't want her identified in this story. “She bent to reach for something and the back of her shirt rose up a little bit so I went to inspect and I lift up her shirt and her back is just covered, covered in bites. I’ve never seen nothing like it,” Kane says. He tells us furniture purchased for her apartment a year ago will now have to be thrown out because of this latest infestation.

Another resident we spoke with sent us images of her arms and legs. She says the bugs crawl all over you while you sleep, leaving their bite marks behind. 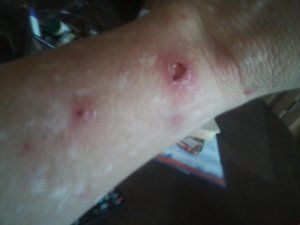 “They're all over the walls, they were down in the community room, it's, it's really bad,” Fairley says.

We contacted the Madison County Health Department and they tell us because the building is privately owned, there's no enforcement action they can take regarding the bed bugs. So we’re taking the complaints of the residents to the Department of Housing and Urban Development.

We did reach out to the owners of the building. Their attorney tells us the owner contracted with a local pest control company that treated the entire property in February, rechecked every unit twice in March, and has made monthly visits since then to treat for any recurrence. At this time, they tell us, there are 4 residents who have asked to be treated again.

The United States Department of Justice (DOJ) is issuing a warning regarding those who may see a card or flyer stating that the owner is exempt from wearing face masks. The information was not issued or endorsed by the DOJ.

A card circulating online by group calling themselves the Freedom to Breathe Agency, claiming the holder is lawfully exempt from wearing a mask endorsed by the American with Disabilities Act, is simply not valid. Health experts and the DOJ are also urging the public not to believe the claim that wearing a mask will incur mental or physical risk, as described by the exemption card being distributed online. The information on the card also claims that the Americans with Disabilities Act forbids asking about the cardholder's health condition aggravated by wearing a mask. The card threatens that if questions are asked, financial penalties of up to $75,000 or higher can be levied.

Allowing someone you don’t know to drive away with your belongings is among the many stressful aspects of a long-distance move -- especially if that move is complicated or maybe prompted by the coronavirus (COVID-19) pandemic. Unfortunately, some consumers find their stress compounded by fraudulent movers who charge them many times the amount quoted, subject them to unreasonably long delivery windows, hold their items hostage for additional undisclosed fees and leave them with damaged goods.

An in-depth investigative study by Better Business Bureau (BBB) finds that scams are widespread in the moving industry, particularly when it comes to interstate moves. BBB receives an average of 13,000 complaints and negative reviews about movers each year, with many complaints describing how experiences with dishonest moving companies have turned into financial and emotional nightmares. While there are many good, reputable moving companies, best practice is to do your homework first before signing a contract or making a payment.