(ALBERTVILLE, Ala.) – The claims are pretty amazing. Invest in Iraq’s currency – called the dinar – and you could become fabulously wealthy.

How, you’ll ask, is this possible? Supporters of dinar investment argue the currency will one day rise sharply in value against the U.S. dollar. They refer to this change as a “revaluation” or “RV” and some argue it could happen at any moment.

Tennessee Valley residents, along with many more across the country, are buying in. So, is it a smart move? Or a scam? WHNT News 19 is taking action to find out.

Tim Jones, an Albertville resident with a house full of kids, is among those who own Iraqi dinar. Jones tells WHNT News 19 he was thinking of his children when he paid out 1,000 U.S. dollars to get 750,000 Iraqi dinar.

“I was like, ‘Oh my goodness! Look at all this!,'” Jones said, describing the feeling he got holding the crisp new bills.

Jones bought his dinar years ago, expecting a “revaluation” to happen. It still hasn’t, making him question whether he, along with friends and fellow church members, made the wrong choice.

Our investigation started online – where there are countless websites, blogs and forums devoted to Iraqi dinar. Many feature talk of an “imminent revaluation” and furious debate on when and where it will happen.

The founder of Iraqidinarchat.net agreed to talk with us on the phone – only using his first name – Mark. Mark said he invested in Iraqi dinar 10 years ago and believes his gamble will pay off, although perhaps not in a “windfall” as some suggest. 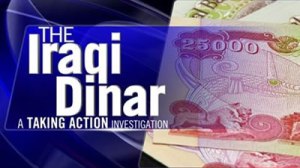 He said he created his website as an “informational hub” for investors and told WHNT News 19, “Most all of the content on the website comes from Arabic websites that are translated.”

Along with news headlines, Mark posts updates from the “Gurus.” “Gurus” are popular dinar promoters who encourage investors with claims of inside knowledge about Iraq or the looming revaluation.

Mark tells WHNT News 19 some of the claims are “absolutely outlandish.” “I’m quite surprised that some of them haven’t been sued,” he said.

In fact, false claims about the dinar or its potential to rise in value have prompted several states – including Utah and Washington – to issue warnings about the currency.

In a 2011 alert, Utah’s Department of Commerce warned:

“This scam comes in three parts: the hyped returns that play on an investorʹs greed, the deceptive practices of Iraqi Dinar dealers, and the fundamental misunderstanding of international finance.”

“Websites selling dinars also exaggerate or misrepresent history as proof that such profits are possible, but history teaches a vastly different lesson.”

The Alabama Securities Commission has also been tracking increased interest in dinar investment and in response to WHNT News 19’s investigation, is issuing a statewide “investor alert.” You can click here to read an advance copy of that full alert. Here’s an excerpt regarding the dinar:

“The Iraqi dinar “investment opportunity” is a scam that has existed for more than a decade and has regained some of its former popularity. As with many foreign exchange currency trading frauds, the dinar investment opportunity is often pitched as a “can’t miss” method by which the interested investor can profit from a severely undervalued Iraqi currency that is “certain” to appreciate in value in just a short time.”

“Fraudsters engaging in the dinar scam promise that extravagant profits can be realized if the investor buys the dinar at today’s values, typically 1,000 or more dinars to one U.S. dollar. The investor then exchanges the dinars for dollars at a later date, once the dinar exchange rate has improved.”

State regulators aren’t the only ones who warn against buying dinar for profit. The Better Business Bureau just listed Iraqi dinar investment as one of its “Top 10 Scams of 2013” and notes scammers may use “real current events and news stories to make pitches more appealing.”

“The marketers of this plan are doing a great job,” North Alabama BBB President Michele Mason explained, “They’re putting so much out there that you’re gonna find that that may overwhelm the negative that you may really need to see.”

Another major red flag? Iraqi dinar generally cannot be bought or sold at U.S. banks so investors just like Tim Jones, often get it through private dealers, which can charge a 20 percent markup or more.

According to Alabama Securities Commission Director Joseph Borg, dinar dealers are often not properly registered to sell money as an investment and even if they are, it’s against the law to make any guarantees about an investment’s future performance.

“So right now,” Borg explained, “Those who are selling dinars as an investment vehicle are probably doing so illegally.”

That brings us back to Tim Jones, who bought in hoping dinar would be a blessing and after hearing the expert warnings WHNT News 19 found against dinar investment, doesn’t have much hope.

If you’ve purchased dinars and feel you were sold false promises about their future potential, the Alabama Securities Commission wants to hear from you. Click here to read the full “investor alert” then call 1-800-222-1253.

UPDATED: WHNT News 19 continued our investigation into dinar with a special report that aired Friday, May 9th 2014. We put claims used to promote Iraqi dinar as a good investment to the test. Are the claims legit? Or are investors being misled? Click here to watch and read for yourself!