REDSTONE ARSENAL, Ala. — When you see an Army helicopter flying, or video of soldiers on the patrol or most any illustration of soldiers, it’s sometimes hard to remember that these are people just like you.  Men and women who have families.

“Looking back, I had a blast,” said Army Sgt. 1st Class Mark McClanathan. 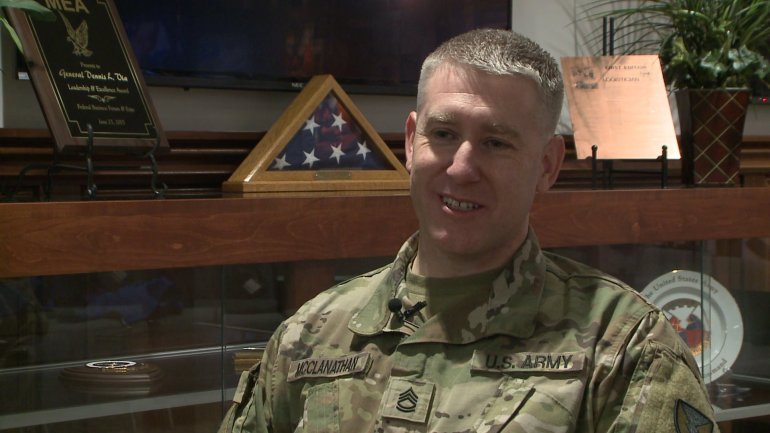 The Sgt. is in the Army now, but the blast he’s talking about is the 5 years he spent in the Air Force as a crew chief for an F-16.  He left the Air Force and married Carmen and then a year and a half later he joined the Army.

“The Army offered me that opportunity to get trained in what I wanted to get trained in, to give me a different career path and bigger chances for progression and more travel, so, that’s why we did it,” said McClanathan.

These days he’s an I-T Systems Specialist, that job for which he was wanting to be trained.  That was part of the bonus for joining the Army, and there are others.

“Free travel around the world. I mean I didn’t have to pay to take her to Germany and live there,” said McClanathan.

There has been plenty of travel, living in other countries and moving for a growing family that includes Isabella, Taylor, and Jaxon, who has a thought about the moving. “I definitely like the meeting new people part, cause when you move you don’t know anyone and there’s always the chance of finding a lot of things in common in people,” said Jaxon.

You would call his thought looking on the bright side. But moving isn’t always fun, and certainly having a member of the family on deployment to a place like Iraq or Afghanistan isn’t always pleasant.

“For me it’s easy, and I think you’ll hear that answer from most military, active duty or reserve or guard military members. The hard job is the spouse and the kids,” said SFC McClanathan.

Of course, there are homecomings to be relished and also knowing what Dad does. “I’m proud of what he does, how he does it, and how he helps,” said Jaxon.

You learn a lot of different things in a 12 and a half-year Army career. Some of it is what you do, what you see and what you learn. “Any job is hard. There’s a lot of jobs where you travel and go away on business trips. The Army takes care of its people, bottom line,” said Sgt. 1st Class Mark McClanathan.

His family just one of thousands of families being remembered this November. It is Military Family Month.  As Sgt 1st Class McClanathan said, if you thank him for his service, say something to his family too.