The coaches held their joint press conference with the national championship trophy.
This will be the fourth year in a row that Alabama and Clemson will meet in the College Football Playoff Championship.

Saban is looking to win his seventh national title, which would put him ahead of Bear Bryant for the most all time. Swinney is looking for his second.

The coaches were complimentary of each other and their teams' performances during the season.

"To have this opportunity to play against an outstanding Clemson team, I'd like to congratulate Dabo, his team and staff for the outstanding season that they've had," Saban said.

"Really excited about the opportunity to compete against the best team in the country on the highest stage," Swinney said. "This is what we all set out to do, 130 teams."

Nick Saban and Dabo Swinney addressed the media for the final time before Monday’s @CFBPlayoff National Championship Game. Hear from both coaches tonight in sports on @whnt pic.twitter.com/MP2YiZmd9t

Over the years, Saban and Swinney have grown close. Both say that in ways, they are mirror images of one another as well as their teams. Both were asked what attributes they have taken from one another and incorporated into their programs.

Saban said he has a tremendous amount of respect for how Clemson does things.

"They do a great job of recruiting," he said. "They do a great job of developing their players, and likewise, that's what we try to do in our program and we're constantly trying to evaluate other successful programs, including Clemson's, to see if they're doing something that might help us improve what we do to help our players be more successful."

"So for me, I think a couple things: One, how [Saban] has just been himself, regardless of what people think or say or whatever," Swinney said. "He's been himself, and he's stuck to the things that he believes in, and that's a lesson for me, to be myself and to be convicted in my beliefs and how I think that I should run the program."

The coaches talked about what it takes for their players to stay consistent enough to play on a stage as big as the championship game. 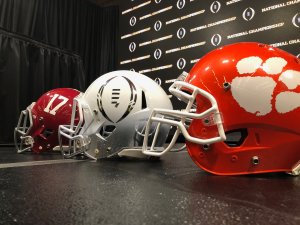 "I think what we try to get our players to do is play to a standard, be the best version of themselves," Saban said. "I oftentimes get on our players even when we win, and people don't totally understand that, because regardless of what the scoreboard says, how did you really perform? Did you perform to your best of your ability? Did you create the best value for yourself and for the team by the way you execute the discipline that you played with, how you were able to focus on the next play, not get frustrated with something that was difficult for you. To be a great competitor, you've got to overcome adversity."

With Alabama and Clemson playing four of  the five years the College Football Playoff has existed, some fans think the annual battle is ruining college football. Both coaches disagree.

"I'm not going to apologize for having a great team and a great program and a bunch of committed guys, and Coach Saban is not, either," Swinney said. "I think the objective is to get the two best teams. That's kind of the way it is. If that's not best for college football, then why did we even do it?"

BIRMINGHAM, Ala. - We are down to the final four across all classifications for high school basketball in the state of Alabama, and a few teams from the Tennessee Valley are in the mix.

Here's a look at how they did:

Scott Cochran, arguably the most important part of Alabama football beyond Nick Saban, will leave to work for one of Nick Saban’s proteges.

LOS ANGELES (AP) — NBA legend Kobe Bryant will be remembered today in a public farewell at the Staples Center in Los Angeles. Thousands of mourners will gather to pay their respects to the former Los Angeles Laker, as well as his 13-year-old daughter Gianna and the seven others who were killed Jan. 26 in a helicopter crash. The Celebration of Life will feature music and retrospectives on Bryant's career, along with speakers reflecting on his impact on his sport and the world. Bryant became active in film, television, and writing after his career ended in 2016.