ARAB, Ala. – The Arab Knights are coming off a big win over Ardmore improving to 3-1. A game in which their starting quarterback shined.

Ross Reynolds came to play last week against Ardmore. The Arab QB threw for 207 yards and three touchdowns, plus ran for two more and that is why he is the Tyler Mann Player of the Week.

WHNT News 19 Sports Reporter Olivia Whitmire surprised him with the award during practice. 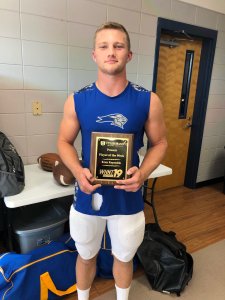 After receiving the award, Ross Reynolds said he was “excited! I didn’t know it was gonna happen, it was kind of out of the blue. It was cool I like it. I’ve got my linemen in front of me and that’s a real confidence booster and I’ve got all my receivers. It’s just really easy for me because they’re, they really help me out a lot so I can’t take all the glory for it because mainly, it’s them too.”

“When I first got here in January, I asked a lot of Ross,” said Arab coach Lee Ozmit. “I asked Ross to step out of his comfort zone and be more of a vocal leader, and he has become that. What you see on the field is just like the tip of the iceberg I mean he is a great young man he excels everything that he does he gives it his best. His work ethic, it’s how he is coachable. Whatever you ask him to do he’s gonna do it or he’s gonna try. In this modern-day culture where it’s all about me and what’s next to it, it’s refreshing to see a young man like Ross Reynolds.”

(WKRG) - The Alabama Department of Public Health (ADPH) said Wednesday it will soon be receiving results from a large laboratory that had not reported its COVID-19 results to the department.

Because of this delayed reporting, upcoming COVID-19 numbers reported by ADPH will be skewed. More cases will be reported in the coming days, but it does not mean that all of those cases happened recently.

Marshall County residents desperate for unsafe road to be fixed

MARSHALL COUNTY, Ala. - People who live on Shin Point Road in Marshall County say its hard to get to and from their homes due to dangerous road conditions, and they just want help to get the county to maintain the road.

BIRMINGHAM, Ala. - Many parents do their best to keep their children from dealing with stress, believe it or not, kids do get stressed out. That stress can be caused by bullying at school, the pressures of social media and even the pandemic.

Water main break on South Parkway to cause major delays