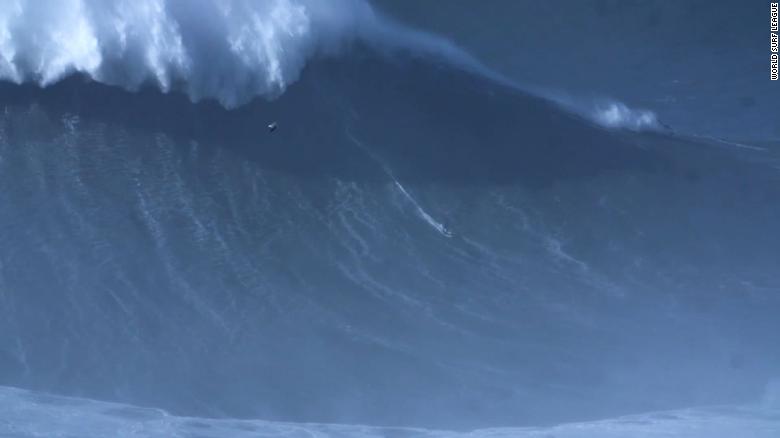 And now Brazil’s Rodrigo Koxa has surfed the biggest wave of the lot with a world-record 80-foot monster at the infamous Nazare break in Portugal.

Koxa’s streaking descent down the massive wall of water set a new official record for the largest wave ever surfed and earned him the prize for biggest wave of the year at the World Surf League Big Wave Awards in Southern California.

The Quiksilver XXL Biggest Wave Award, which comes with a $25,000 prize, goes to the surfer who catches the largest wave of the year by any means — either by paddling into it or being towed in by a jet ski.

In other awards, UK surfer Andrew Cotton was honored with the best wipeout of the year after a horrifying tumble that broke his back at Nazare in November.

Cotton was rescued and taken to hospital, but said he was looking to returning to surfing “in a couple of months.”

“I’m feeling good, obviously I’m in pain, but I’m feeling positive, and I’m looking forward to rehab and getting back out there really,” Cotton told CNN’s Don Riddell from hospital at the time.

Hawaiian Paige Alms won the women’s big wave performance award, while Ian Walsh took the ride of the year title for pulling into a cavernous tube at the legendary “Jaws” venue on Maui.

The news was announced by the Pro Football Hall of Fame. There is no word on a cause of death..

DALLAS (NEXSTAR) -- The wrestling world is mourning the death of legendary tag-team wrestler Joe Laurinaitis, better known to fans as "Road Warrior Animal," at the age of 60.

Details of his death were not immediately available. TMZ Sports reports his wife called 911 late Tuesday night from a resort in Osage Beach, Missouri.

The Braves hit five homers, including shots by Dansby Swanson and Freddie Freeman off Nick Vincent in a five-run seventh.