Skip to content
This is an archived article and the information in the article may be outdated. Please look at the time stamp on the story to see when it was last updated.
HOUSTON, Texas – Alabama quarterback Tua Tagovailoa had a successful surgery on his dislocated hip Monday. In a statement, the university said, “The procedure went as planned, and [Tua] is resting comfortably.” 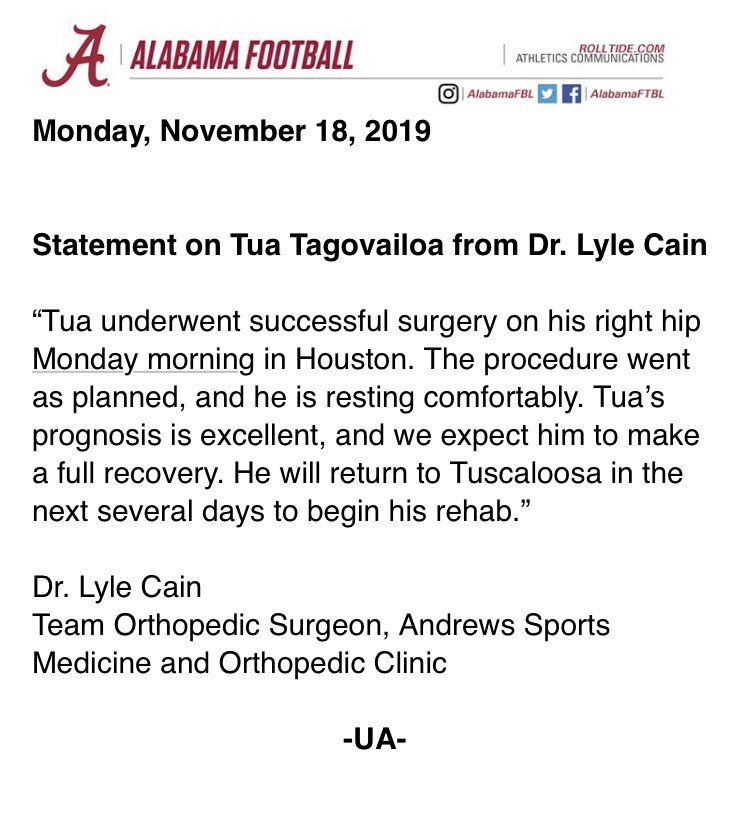 “Tua underwent successful surgery on his right hip Monday morning in Houston. The procedure went as planned, and he is resting comfortably. Tua’s prognosis is excellent, and we expect him to make a full recovery. He will return to Tuscaloosa in the next several days to begin his rehab.”

Tua dislocated his hip late in the first half of Saturday’s game against Mississippi State, in what Head Coach Nick Saban said was going to be his last drive of the game. It’s not every day, in fact, it’s not common at all that we hear Nick Saban get emotional but that’s exactly what he was when talking about losing his starting quarterback Tua Tagovailoa.

Tua also can’t wait to be for Senior Day on Saturday.

We could all act a little more like Tua in our lives, so much positivity ♥️ pic.twitter.com/lc7bd4Ythz

“I feel bad I’m hurting alright,” said Coach Saban in a news conference. “So I call him Saturday night to cheer him up, he cheers me up. I call him last night cause I’ve been sitting in that room for 10 hours yesterday watching film I call him to cheer him up he cheers me up. I can think back to 4-5 players that I actually truly could say I love those guys as people, the way they did things, the contribution that they made. how they affected other people and ya know Tua would be one of those 4-5 guys.” Tua will be out for the remainder of the season as he recovers.

Tua has been extremely positive since getting injured and his teammates have shared some of that positivity, like videos of Tua dancing and playing the ukelele in his hospital bed last night. You might not expect so much joy from someone whose season just ended, but that’s just who Tua is. “You go to the hospital and expect someone to be down but you come to the door and he’s just already lit up,” said Jedrick Wills. “It was a great feeling being there for him and a good experience for us to go there and just kinda be behind him through this thing.” “As leaders we know we have to step up to be able to come more of a leader like how he was cause he was a very vocal leader and he was a lead by example type of guy,” said Shyheim Carter.

HUNTSVILLE, Ala. - The Alabama High School Athletic Association is postponing its Hall of Fame ceremony again.

TUSCALOOSA, Ala. (AP) — Alabama offensive coordinator Steve Sarkisian will make $2.5 million a year under a new three-year deal reached after his flirtation with the Colorado head coaching job.

University trustees approved Sarkisian’s new deal and others for assistant coaches and support staffers on Wednesday. It includes a raise of more than $800,000.

A letter to Alabama supporters from Athletic Director Greg Byrne details some of the financial challenges the department has faced due to the COVID-19 pandemic.

Byrne said in an attempt to offset revenue shortfalls, operating budgets for all departments and sports have decreased, a freeze was placed on vacant non-coaching positions.