HUNTSVILLE, Ala. --  Senior US Senator Richard Shelby paid a visit to the Rocket City Monday morning to deliver the 2019 Washington update for the Huntsville-Madison County Chamber of Commerce.

The senator from Alabama addressed the growth of the FBI at the arsenal, his cautious stance on the formation of a 'space force', and the status of the proposed new federal courthouse in Huntsville.

Of course, the big topic of the event was on Washington's progress preventing another government shutdown.

Shelby didn't hesitate to express his disappointment in the first shutdown.

This week, a special bipartisan conference committee, working towards a deal on border security, will be meeting with experts to see what is really needed.

"What do they need to protect our borders? Is it a combination of a fence? A barrier? Or is it more people on the ground? Is it all of that? I believe it's all of that, but I don't know for sure because we're trying to unlock the negotiations and get the job done," explained Shelby.

He agrees with the President that more is needed to protect the borders, but sees the disagreement as becoming too political.

"We need to solve this," he added. "We need to get beyond shutting down the government."

If the country enters into another shutdown, Shelby says it will just compound the problem for federal workers in unfunded sectors like NASA.

"You've got thousands and thousands of people not getting paid," he added. "But I assure you, we're gonna pay them."

The senator said he would entertain legislative ideas 'floating around' in Congress about how to prevent future government shutdowns but said overall, "What we oughtta do is do our jobs."

Shelby planned to talk with Speaker of the House Nancy Pelosi after the breakfast and said he spoke with Vice President Pence Sunday to try and continue working towards a solution. However, he is pessimistic that anything will be solved this week. The president is expected to give his State of the Union address Tuesday night.

"Huntsville's on fire," Shelby said as he celebrated the city and county's growth and progress. A huge contributor -- growing FBI investment which Shelby believes could reach $1 billion.

"Right now you have a huge amount of construction going on for the FBI at Redstone," he said. "I think it will be one of the biggest presence of the FBI outside of Washington."

In November, the bureau announced the transfer of over 1,300 jobs to Redstone Arsenal. A new rendering for the FBI planned building was displayed at the event. 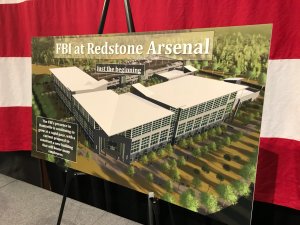 Shelby also said the proposed new $110 million federal courthouse in Huntsville here at the corner of Gallatin St and Lowe Ave would be coming 'soon.' The current status -- they have the money and are in the design phase.

And you can't talk about the greater Huntsville area without bringing up the defense sector. Shelby sees the president's new missile defense policy as a positive for the area. "Huntsville is the center of missile defense and anything that adds another layer of it is going to benefit the whole area of north Alabama and Huntsville."

He was also asked about his position on the creation of a 'Space Force' service proposed by President Trump and subsequently a space force service academy in Huntsville.

"I'm cautious," he added. "I haven't come out for or against the creation of the space force. But if there's going to be a space force, Huntsville would be the place for it."

Alabama's 5th district US Representative Mo Brooks underscored north Alabama's national support. "Nationally, people have started to recognize what we have to offer here. We have everything expanding businesses want."

(CNN) - You can get a free short stack of buttermilk pancakes at IHOP restaurants on Tuesday.

And if you're really lucky, you might win free pancakes for life.

(CNN) -- While in an ambulance making its way to Rikers Island after his conviction on sex assault charges, Harvey Weinstein was rerouted to New York's Bellevue Hospital for chest pains, heart palpitations and high blood pressure, his attorney said.

CAIRO (AP) — Hosni Mubarak, the Egyptian leader who for nearly 30 years was a fixture in Mideast politics before being forced by the military to resign after nationwide protests that were part of the Arab world's 2011 pro-democracy upheaval, died on Tuesday, the country's state-run TV said. He was 91.

Throughout his rule, he was a stalwart U.S. ally, a bulwark against Islamic militancy and guardian of Egypt's peace with Israel. But to the tens of thousands of young Egyptians who rallied for 18 days of unprecedented street protests in Cairo's central Tahrir Square and elsewhere in 2011, Mubarak was a relic, a latter-day pharaoh.