ATHENS, Ala. – There’s nothing more comforting than wrapping yourself in one of your grandmother’s quilts. One group is using that idea to wrap some love around north Alabama barns.

The Alabama Barn Quilt Trail started in the Shoals in 2015. Dale Robinson says there are several reasons for that. “To get people to come out into the countryside and drive around and see the farms and the barns,” Robinson says, “And see the barn quilt squares.”

The idea was born in Ohio 19 years ago by a woman who was looking for a way to honor her mother who was battling cancer. Regina Painter of Killen, who also quilts, saw some of the squares on Kentucky barns. She fell in love with the idea and brought it home to Alabama.

Dale Robinson and his wife Lisa are the grease that turns the wheel. Dale draws the patterns. Lisa paints. She’s done at least 25 of the blocks on the trail.

The art promotes tourism, honors the women who created the quilts and our hard-working Alabama farmers. “People need to get out and see the countryside and realize how hard they work to provide us what we use every day,” Robinson said.

He hopes the barn quilt blocks will become as popular as those “See Rock City” barn roofs. “Absolutely,” he said, “We regularly get emails from people from Ohio and different parts of the country that have come here just to see the trail.” 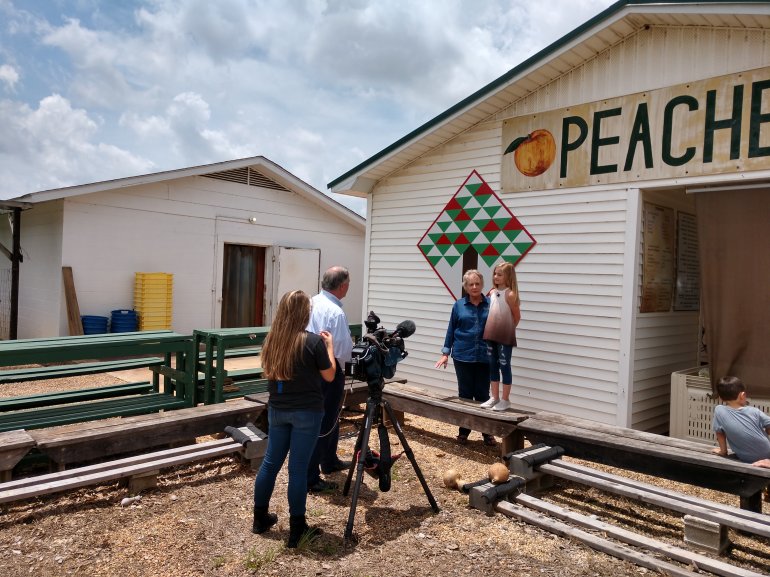 The block at Isom’s Orchard on Highway 72 in Athens is the 50th painting on the trail. Dale created it from a block the Isom’s gave him from a family heirloom. He delivered it to Janice Davis who has done four or five pieces now.

Standing next to her granddaughter, Janice told us, “I would tape it off and sand it and then Elle would wipe it off and get all the lint off and she actually did all of the painting.” It was actually, really fun,” Elle Power said with a smile, “It was like a big craft.”

There are 50 blocks on the trail right now with more planned down the road. “We’ve gotten probably 25 or 30 requests for barn quilt blocks all over the state,” Robinson said. The non-profit group is hoping to take it statewide. “We just got a grant from the Alabama Council on the Arts and that’s going to help us spread the trail,” Robinson said.

The first blocks were done on wood. Some already need to be replaced because of the weather. They’re now painted on aluminum which means they’ll last a lifetime. That means Elle will be able to bring her kids to Isom’s and show them what she and her grandmother did together. How cool is that? “That’s really cool,” she said smiling.

Deputies responding after a reported shooting near …

Deputies responding after a reported shooting near …