HOLLYWOOD, Ala. — Residents in Jackson County have lived in the shadow of a promised economic boom for decades.

“It’s been a little bit of a roller coaster for our community for many years, 20, 30 years,” said Rick Roden, CEO of the Mountain Lakes Chamber of Commerce in Scottsboro.

Today, Jackson County is anticipating the opening of a Google data center, the first phase of an ultra-modern project local officials hope will expand for years to come. 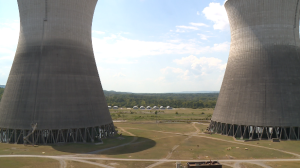 But, there are still plenty of questions about what will happen to the Bellefonte — whose cooling towers dominate the skyline for a stretch of U.S. 72.

Construction on the plant, which is Hollywood, Ala., began back in 1974. But TVA pulled the plug on the project in 1988 in the midst of cost overruns and rising debt.

There have been a number of stops and starts since 1988. TVA says it considered a number of alternative uses for the site, including a coal plant, a natural gas plant, an advanced nuclear reactor plant and mixed commercial and residential uses

So far, TVA says it has spent $4.8 billion on Bellefonte.

“I don’t remember how many times TVA was going to build it, then they weren’t,” Roden said.

In 2011 TVA said it was going to finish the plant, then in 2016, it decided it didn’t need the power, given its estimates for the next 20 years of electricity demand, or Bellefonte.

The Southern Alliance for Clean Energy a Knoxville-based watchdog group says TVA made the right call.

“Bellefonte is like a Ford Pinto. It is an antiquated 1970s version of a nuclear plant, that is out of date, not modern, not able to be brought online,” said SACE Executive Director Stephen Smith.  “Never has this design ever received an operating license in the United States.

TVA decided to auction off Bellefonte. Longtime Chattanooga developer Franklin Haney was one of the bidders, with his group Nuclear Development LLC, along with a group known as Jackson Holdings.

Roden, a longtime economic development leader for Jackson County, recalls how it went down.

TVA set a start price for the plant at $36 million.

TVA figured the plant wasn’t worth it, an inspector general report found it would cost $7.5 to $8.7 billion to finish one reactor.

But Haney’s group includes former top TVA nuclear officials and former Huntsville-area Congressman Bud Cramer. They say since more of the plant’s work is done — about $5 billion worth — they can finish both reactors for about $8 billion more.

“So, the excitement came back again because when we looked at his plan it was pretty impressive and he had done his homework,” Roden said, noting Haney doesn’t have a nuclear energy background, but he’s working with people who do.

U.S. Rep. Mo Brooks is a supporter of finishing the plant. He cites how much TVA has already spent on Bellefonte, and a University of Alabama study, commissioned by Bellefonte’s would-be developers, that showed plant workers would average more than $130,000 a year.

During a House Science, Space, and Technology Committee Energy Subcommittee hearing in September, Brooks raised the issue with a U.S. Department of Energy official.

“There is an effort to get that facility completed by the private sector,” Brooks said. “There are things that have to be done by the Department of Energy, if there’s anything you can do, sending the message back, know that the people of Jackson County,  Alabama, would very much appreciate it.”

But the private sector needs taxpayer money for deal, a lot of it.

Haney’s group says it is seeking $8.5 billion in federal government loans to complete the project, according to an op-ed by Bill McCollum, a former top TVA official now working with Haney.

“The federal government can’t really afford, given the fact that the deficit is running up, nor is it going to want, this kind of a failure on its hands,” he said. “That’s why my understanding is they’re putting pressure on Haney’s crew to go back and try and legitimately show some sort of customer.”

A Bellefonte nuclear plant would need a big customer. Haney’s group has focused on Memphis, Light, Gas & Water – which also happens to be TVA`s biggest customer, about $1 billion annually – in a sort of nuclear power love triangle.

Nuclear Development officials say they can sell power to Memphis at about half of what TVA charges. TVA says it would be risky for Memphis to switch away from TVA, to an unproven power provider.

The Memphis utility had entered a non-binding “letter of interest” with Haney’s group in January but says it has declined, so far, to agree to a letter of intent binding it to a power purchase deal with the group.

The utility told WHNT News 19 it is waiting on a study, due in December, that will examine its power purchase options and whether Bellefonte is likely to be completed. The utility said it has a “multitude of concerns” and it’s premature to commit to any power purchase agreement.

For Roden, CEO of the Mountain Lakes Chamber of Commerce, the effort to complete Bellefonte would be worth every penny.

“This is a nuclear lemon that Haney is trying to fix up and pawn off on somebody, take advantage of the federal dollars, it’s not going to happen,” Smith said. “And, it’s irresponsible to continue to encourage the people of East Alabama that this plant is ever going to do anything that is going to help the economy there.”

Haney’s group was recently given an extension by TVA until Nov. 30 to pay the $89 million balance it owes to buy the plant. It put down $22 million following the 2016 auction.

‘The Dr. Phil Show’ is ending after 25 years

MPCAC Hosts Community Meeting on How to React to …

Policing Back in the Spotlight After Tyre Nichols’ …

MPCAC Holds Meeting on How to React During a Police …

Is it illegal to drive without headlights in the …

‘The Dr. Phil Show’ is ending after 25 years