GURLEY, Ala. – The Gurley Police Department held a news conference Thursday morning laying out its recent cases of burglaries and thefts, which turned out to be part of a multi-state crime spree.

20-year-old Christopher Crowell and 18-year-old Shane Crowell are in currently in custody in Michigan accused of stealing multiple vehicles including the Gurley Volunteer Fire Department’s Tahoe, multiple handguns, and a large amount of personal property.

The total approximate value of all stolen items totals an excess of $91,000.

Gurley police say the Crowell brothers were staying in the New Hope area when they decided to make a visit to Gurley and break into several vehicles.

“All the vehicles the items were taken out of were left unlocked in people’s driveways,” says Gurley Police Sgt. James Martin.

Police are calling it a crime of opportunity. The two found the fire department’s unlocked Tahoe and took off to Michigan, where we are told they have family.

Here is their route according to police: 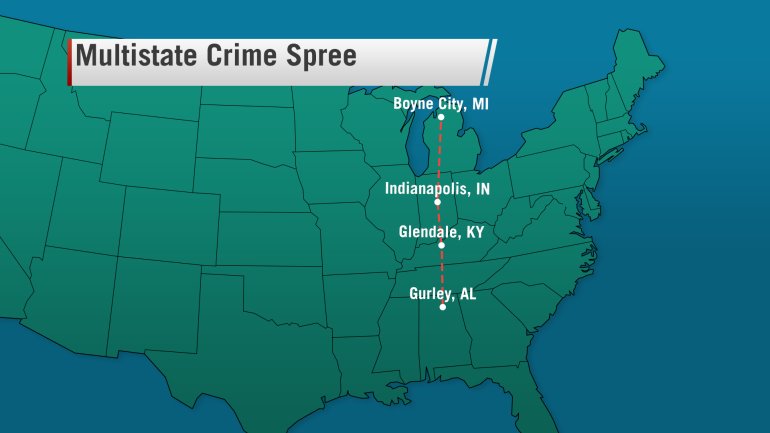 Gurley Police traveled to Kentucky to get back the stolen Tahoe, and when they arrived they found it in a mess.

“We did learn that they had stripped the vehicle,” says Sgt. Martin.

Police say the Crowell brothers admitted to getting spooked and dumped all of the emergency equipment from the Tahoe in Nashville. That led police to go dumpster diving.

Police found most of the fire departments missing equipment in that dumpster, but they were unable to locate one very important device. Police are hoping to locate the missing $20,000 LUCAS device used by medics to save peoples lives when under cardiac arrest. Police say the damage to the Tahoe from the two men stripping the vehicle is approximately $12,000.

A search was conducted at the home in Michigan. Three stolen firearms and personal property were recovered.

Christopher and Shane Crowell are facing numerous charges including several felonies and will be extradited back to Alabama after they answer for the crimes accused of in Michigan.