HUNTSVILLE, Ala. -- Coders, scientists, students, and builders racked their brain at the Space Apps Challenge to try and solve 20 of the biggest challenges facing Earth and space.

According to their website, Space Apps is an international Hackathon for coders, scientists, designers, storytellers, makers, builders, technologists, and others in cities around the world, where teams engage with NASA’s free and open data to address real-world problems on Earth and in space.

Competitors have a little over 24 hours to solve issues that have been facing humanity for years in a "hackathon." Space Apps PR Coordinator Logan Moore says many people hear "hackathon" and they think of people hacking into their computers and breaking into their systems, but that's not it. "Hackathon is really just a problem-solving event," says Moore.

Some of the challenges include providing internet on the ocean, creating an orbital debris collection app, and improving performance of machine learning.

"We are looking to procure different satellite data and it use it to build an early detection system for signs of famine in sub-Sarahan and southern Africa," says competitor Aniket Pant.

Another competitor, Thomas Salverson says his team designed a lunar rover that's capable of going around the moon and mapping where ice is found. "Radar has shown roughly where ice is on the moon," says Salverson. "We wanted to have a way of mapping it out more directly."

The challenges might sound difficult, but Moore says to win the competition, you need people with different kinds of intelligence. "We are focusing on science, technology, engineering, arts, and mathematics," says Moore. "Not only do we need people who can do the coding and the programming, we also need people who can perfect a pitch and sell their product."

"Our team has both software and mechanical people so it was a fun combination," says Salverson.

People from all across the world are working to improve different challenges, one idea at a time. "Our team is actually built on the central idea of using data for social good and driving social change," says Pant.

The work doesn't stop after the competition has ended. Pant says his team could continue pursuing the idea afterward.

Over the weekend, Moore says over 25,000 participants from around the world competed in NASA's International Space Apps. This year, all eyes were on Huntsville because it was named as the "Main Stage Event," meaning the global live steam was watching the competition in Huntsville. 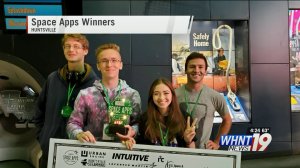 The grand prize winner in the open division was 'Team Star-Struck' and was made up of students from the University of Alabama in Huntsville. The challenge was called 'Build a Planet.' They took home top honors for creating an educational game that allows participants to build a planet that could exist in a star system.

Middle school teachers from across North Alabama are getting a hands-on experience to help their students understand who they are.

The HudsonAlpha Middle School GPS Workshop is focused on giving educators new ways to teach genetics and genomics inside their classrooms.

On first glance, FIRST may seem like it's all about robotics. In reality, it's way more than just robotics.

There are multiple leagues within FIRST, starting with First Lego League, Jr., and working all the way up to FIRST Robotics Challenge.

HUNTSVILLE, Ala - Booz Allen Hamilton employs more than 27,000 people across the globe, and they continue to search for Huntsville's best.

The Booz Allen Summer Games pins regional offices against each other in a 10-week STEM competition that centers around solving real-world problems for military and other top-level clients.