TUSCUMBIA, Ala. – Winds ripped through the Shoals Tuesday night ahead of some severe thunderstorms. Those winds packed a punch which has been felt across northwest Alabama. One of the areas impacted the most is downtown Tuscumbia.

“I was like, evil coming out to get me? I don’t know what is going on,” explained Jeremy Brewer.

In seconds, Brewer went from relaxing in his loft apartment in downtown Tuscumbia to scrambling.

“Well, that sounds like it’s about to storm. It went from just a little (wooo) to (whoosh),” described Brewer.

No sooner than he got to the window to look out a nearby roof was flying down West Fifth Street.

“It came down the back corner of their building, ripped off some of their roof and they’ve got some leaks. Then it came all the way down here, it looked like my car was a good landing spot.”

His car now has a busted back window and dents through-out. It was parked next to this car, now wrapped in metal roofing. 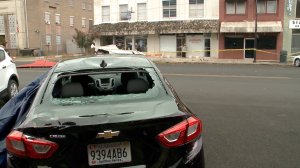 The Colbert County EMA, who is right next door, says they recorded winds at 51-miles per hour as things went bad.

Brewer is trying to figure out what his next move is.

“I should be at work,” said Brewer. “But instead I’m going to be dealing with insurance companies.”

It appears this Lyft driver will be parked for several days.

Numerous trees and power lines were reported down across northwest Alabama. Emergency management agencies say luckily there were no injuries from the falling debris.

MUSCLE SHOALS AND PHIL CAMPBELL, Ala. - Summer 2020 classes at both Northwest-Shoals Community College campuses will be held online.

The college announced Saturday all career technical and health studies courses will be taught online during June, with skills components to be taught on campus later in the summer semester.

FLORENCE, Ala. - Florence Police said they are searching for a man wanted for domestic violence.

Devontae Montrell Goodloe has a warrant for third-degree domestic violence.