FLORENCE, Ala. – A former Florence businessman convicted of possessing and sharing child pornography could spend the rest of his natural life in prison.

Pete Wesson’s family sat in shock as Judge Ben Graves handed down the sentence. Graves stated he could show leniency, but he wouldn’t give Wesson any grace on his conviction. 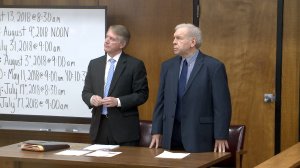 Pete Wesson has remained in custody for the last four months in the Lauderdale County Detention Center.

Leading up to his April trial date, Wesson was indicted on dozens of additional charges in January related to possessing and sharing child pornography.

During the sentencing hearing Tuesday, friends of Wesson spoke to the judge stating he was not a child predator.

Just moments before Judge Graves handed down the sentence Wesson addressed the courtroom. He stated, “I’m sorry more than I can say. I accept responsibility for my actions.”

On the 55-counts of possessing child pornography, Wesson has been sentenced to serve four years on each charge. He was also ordered to serve 10-years in prison on the charge of disseminating child pornography. Wesson will have to serve the sentences consecutively, which means after serving the first four years, he will have to serve the next, and the next, and the next. A total of 230-years.

Attorney’s for Pete Wesson have indicated an appeal could be filed in the near future. Wesson will be transported to the Alabama Department of Corrections in the coming days.