FLORENCE, Ala. – The University of North Alabama gathered Wednesday morning to honor one of their own who died during the terrorist attacks of September 11, 2001. 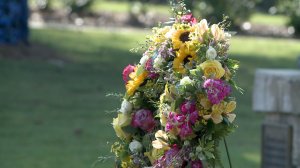 A single wreath stood in front of the UNA Memorial Amphitheater. An honor to the late Major Dwayne Williams, a UNA graduate, and former football player. Major Williams was among those who died during the attack on the Pentagon 18-years ago.

Fourth and fifth graders from Kilby School attended the memorial. Students who only see September 11th as a historical event, read about and watched in lessons. 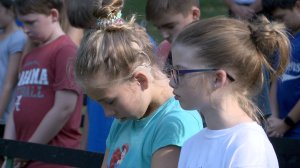 “Things can happen like that,” said 5th grader Truitt Thornton. “You never know when things are going to happen; like a plane could just crash on us now, you don’t know and it’s sad to see.”

The students and teachers feel it’s important to stop and observe those who perished.

“It’s very upsetting. There was a PreK, I think, in the building and it is just very devastating to see that a lot of people passed away,” Ruby Lynn Hunt explained. 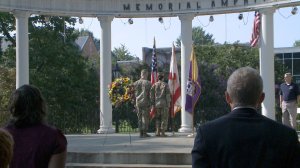 Young minds, trying to comprehend a tragedy which changed the United States forever.

“Something that stands out is that people risked their lives for others to save their lives, and to create freedom in America,” Amelia Gollapalli said.

An insight into history by those who lived and breathed it.

Major Dwayne Williams served as a Paratrooper and Ranger during his service in the United States Army. He had been assigned to the Pentagon just two months before the tragic attack.