COLBERT COUNTY, Ala. – During the summer, it is one of the most visited areas in northwest Alabama. The Rockpile Recreation Area has remained closed since flood waters did major damage back in February. 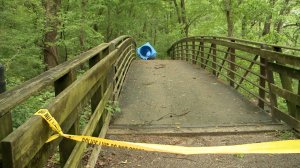 A piece of playground equipment lodged into a walking bridge half-a-mile from where it once stood. Wood fencing used to outline the recreation area was scattered throughout. That’s just some of the damage TVA found when they were able to return when flood waters dropped.

“We were down here the day after the water came down enough for us to get to work,” stated Derek South of TVA. “Of course there was a lot of debris, a lot of logs, a lot of gravel, that kind of stuff lying around everywhere.”

Two months later and the park remains closed. Damage to roads, buildings, and the boat ramp remain safety hazards. TVA says their park’s saw $1.5 million in damage along the river system. The Rockpile is the second worst. 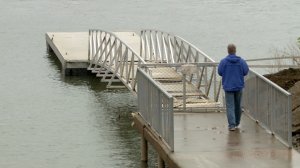 TVA hopes to have the boat launch area ready for anglers in the coming weeks. It all depends on how quickly repairs can be made by contractors. However, it could be late summer before walkers can see the majestic beauty of the waterfall near Wilson Dam.

“The waterfall is a super popular area,” said South. “We get a ton of requests to come down here and look at that. A lot of people are concerned it is going to be closed, but it is not. It’s just going to take us some time to get everything back up and in order.”

The gates on Reservation Road will remain closed for the coming weeks. And to reiterate, all hikers and boaters are asked to stay out of the park for their safety.