TUSCUMBIA, Ala. – Drivers, city leadership, and school administrators in Tuscumbia are celebrating after Wednesday morning’s heavy rain. For decades, all three have dealt with flooding along a major roadway. 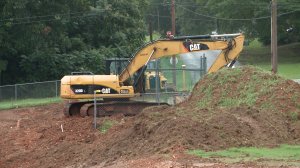 “Normally here in Tuscumbia, we get a rain like that, you are guaranteed Cave Street will be shut down. I got up here (today) and I looked, and I was like, ‘there are no barriers,’” explained Deshler High School Athletic Director Jason Fuller.

For the first time in nearly 70-years, Cave Street did not flood after major rains.

Flash flooding on the roadway normally spilled over onto the football field. In last fall’s semi-final playoff game, the playing surface was a mess after extended rainfall, and almost keeping the game from being played. 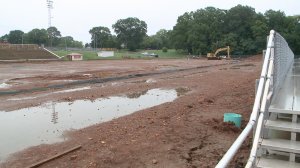 “I think that sort of tipped it over the edge for us,” stated Fuller. “I know Mayor Underwood was very adamant about getting this done and Mr. Aikerson, and it all just came together as a partnership.”

Eight months later, crews are finishing the retention pond. They are also turning their attention to the Deshler football field where drainage will be installed along with new astroturf, a $1.7-million investment.

Right now the entire project is slated to be completed by late August. But right now, school leaders and residents are declaring victory on the drainage issue.

The Tuscumbia City Council and mayor contributed $200,000 towards the overall project to be completed. Pumps in the retention pond will move collected floodwater to nearby Spring Creek.

FLORENCE, Ala. - Florence Police are searching for a missing person.

FPD said Amanda Potts was last seen Saturday and is 5' 7" with brown hair and blue eyes.

FLORENCE, Ala. - A man has been charged with murder after a Saturday shooting left another man dead.

Florence Police said James David Hall, 59, was arrested Saturday in connection with a shooting earlier in the day.

FLORENCE, Ala. — Mission of Mercy Shoals, or MOMS Incorporated, is a nonprofit rehabilitation center in Florence. The center's mission is to help people who suffer from substance abuse and addiction.

A concerned mother whose son is currently in the facility reached out to News 19. After hearing from her son that he was possibly exposed to COVID-19 in a facility vehicle, she questioned why the center didn't notify her.

She said she was told the center doesn't have a policy on notifying people. News 19 reached out to MOMS Incorporated to find out why.

"In order to release information about our clients, we have to have releases signed,” Treatment Coordinator Shaketita Bates said. “Without getting permission from them to release that information, that's not something we could do."

The center does, however, have policies in place for clients who test positive or show symptoms. If they cannot quarantine at home, the center can provide an isolated area for them.

Dr. Karen Landers with the Alabama Department of Public Health said facilities should have policies regarding positive individuals and close contacts when it comes to notifying ADPH.

"Certainly, entities should have that in place because there may be times that they would find out that someone has COVID in their facility, they'd be reported to a family member that their child or their person they're taking care of has COVID, and that may occur well before we get an official lab report through the Alabama Department of Public Health,” Dr. Landers said.

Dr. Landers said that close contacts should also quarantine for at least ten days and make sure they show no symptoms and test negative for the virus.

Bates said MOMS Incorporated quickly quarantines clients who show COVID-19 symptoms and arrangements are made to take them to a testing site. The facility is also cleaned thoroughly to help mitigate the spread as much as possible.