SHEFFIELD, Ala. –  For quite a while, an entire neighborhood would cringe every time it rained. After contacting WHNT News 19 in July, their problem with flooding has been resolved. 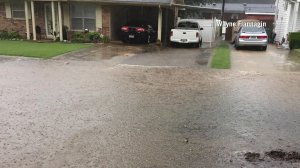 When it rained, residents along Shoals Avenue knew they could expect flooding on the road and around their homes. They were convinced there had to be a problem with the drainage system.

The pictures were astonishing: Up to 20 inches of water standing in their yards.

“The water was at least knee-deep in my backyard, in my side yard. It was standing everywhere. It was awful,” stated Rebecca Southard in July. 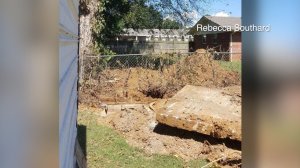 The Shoals Avenue residents' cry for help was heard at city hall. Tommy Barnes with Sheffield Utilities led the team trying to come up with a solution.

“When I witnessed what they were going through and some of the potential damage to the homes, we jumped right on it,” said Barnes.

Last week Sheffield Utilities completed the project. What they found after some exploration was a major clog. 25 to 30 feet of 24-inch pipe was blocked by years of debris. Some of the items found in the storm drain were buckets, bottles, cans, yard debris and tree limbs. 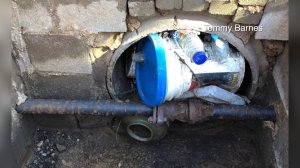 The likely culprit was also unearthed.

“It may have been back in the 50s or 60s where a cast iron natural gas line that had been abandoned, had been bored through the storm drain,” explained Barnes.

After Wednesday’s downpours, the streets and yards are clear from standing water.

WHNT News 19 spoke with Rebecca Southard on the phone on Wednesday. She was extremely excited not to have to deal with flooding along Shoals Avenue for the first time in months.

FRANKLIN COUNTY, Ala. — Photos shared to social media Monday show the bloodied hooves of a donkey in Franklin County. One witness said the donkey was tied to the back of a truck and dragged as a man drove down the street.

Another witness, the man's neighbor, said the donkey was left for dead in a pasture on Bond Cemetery Road.

The neighbor said the donkey laid in the pasture for two days and was in so much pain it couldn't even stand.

Concerned for the animal's safety, the neighbor called a veterinarian but was unsuccessful in having it treated because it didn't belong to them.

Franklin County Sheriff Shannon Oliver was notified and gave News 19 an update. "The donkey's been turned over to the neighbor which called it in,” Oliver said.

The neighbor was then able to get the veterinarian to help.

"The veterinarian says that they had treated it and it's going to take some time for it to recover but with somebody taking care of it like that, it should recover,” Oliver said.

The man has not been charged with a crime yet but Sheriff Oliver said he's currently working with the Franklin County district attorney and reviewing witness statements. The sheriff said the man will most likely be charged with animal cruelty.

The neighbor who is now caring for the donkey said a farrier may be able to build a special prosthetic hoof so it will be able to stand.

RUSSELLVILLE, Ala. - Those in Franklin County who haven't had a chance to register for the 2020 election have an opportunity to do so Saturday.

Two community organizers, Kadesha Little and Tammy West, have partnered up with the Tri-County Branch of the NAACP for a voter registration drive at 201 S. Washington St. in Russellville.