COLBERT COUNTY, Ala. – An email sent to WHNT News 19 from a viewer in the tornado damaged Colbert County neighborhood of Aycock Heights raised a valid question. Why was an outdoor weather siren turned off shortly after being installed? 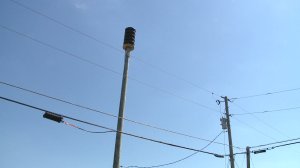 A five horn outdoor weather siren sits on the northernmost part of the subdivision just off U.S. Highway 72. Installed more than four years ago, its sole purpose is to warn those outside of severe weather.

“There are problems with where it is right now,” stated Colbert County EMA Director Mike Melton.

As EMA Director, Melton is in charge of placing sirens and shelters throughout the county. He says shortly after testing this one, six residents expressed displeasure with the location. Including someone who suffers from Post Traumatic Stress Disorder.

“It was asked to be moved,” Melton explained. “Did we ask if the entire neighborhood was advised of what was happening, I did not. But what we tried to do is appease some people.”

So it has sat dormant, and unable to warn people living within its radius. Up until recently, Melton says his hands were tied on moving it.

“Being on a federal grant, it had to be completely closed out before we could even consider moving it. Because it was bought for that location.”

Melton is ready and able now to work with residents to find the siren a permanent home, whether that be somewhere in the neighborhood or down the road.

The Colbert County Emergency Management Agency can be reached at (256)386-8558. Director Melton says he is more than willing to come to the neighborhood and meet with residents to come up with a solution.

Eli Fritchley was a seventh-grader at Cascades Middle School. His parents made the heartbreaking discovery after he took his life in late November.

HUNTSVILLE, Ala. - The Harlem Globetrotters are stopping by Huntsville on their Spread Game tour.

The team will have a show at the Von Braun Center on January 30 at 3pm.