FLORENCE, Ala. – What potential does the Shoals area hold? That is the topic which has been studied by hundreds of volunteers over the last several months with some intriguing answers. 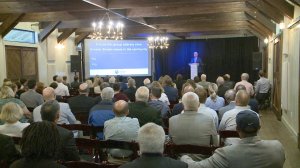 It was not just a meeting Tuesday morning with PowerPoints and speeches. The 150 residents in attendance have a vested interest in the greater Shoals area.

“We really have a tremendous community, but we can be so much more,” stated Macke Mauldin. “And now we have the framework of how we are going to make the Greater Shoals a better place to live and work.”

Mauldin helps steer six committees who studied everything from digital infrastructure to quality of life. Their results show several things which are potentially holding the Shoals area back. Topping the list keeping young people in the Shoals – a brain drain if you will.

“Now, we need to have the leadership from both the private and the public sector to get things done,” said Mauldin. 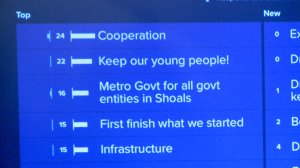 Also a major concern among residents, the duplication of services across city and county lines. There are 41-government entities in Colbert and Lauderdale counties.

Tuscumbia and Sheffield leaders say their operations could be more efficient and save taxpayer dollars through collaboration.

“I think this is something the people would say let’s explore that and see what we can do to become more of a regional, large metropolitan area, instead of all the small entities within it,” Tuscumbia Mayor Kerry Underwood said.

With their marching orders, the volunteer committees will discuss public concerns in-depth and suggest ways to fix them.

The Committee for a Greater Shoals will present their findings and suggestions later this year during another public meeting scheduled for November.

Cyclist killed in crash on Hwy 72 in Colbert County identified

COLBERT COUNTY, Ala. - Authorities have identified the cyclist hit and killed by a vehicle Tuesday night in Tuscumbia.

Colbert County coroner Justin Gasque released the identity of the person as Mark Nix, 51, of Tuscumbia. He says the preliminary cause of death is blunt force trauma, but the investigation is ongoing.

THE SHOALS, Ala. — With protesters gathering at various state capitols ahead of President-elect Joe Biden’s inauguration, Shoals law enforcement officers are keeping in contact should anything happen there.

As of Tuesday, there have been no reports of planned demonstrations or threats of violence in the Shoals but law enforcement officers are keeping an attentive eye on things should anything change.

Tuscumbia Police Chief Tony Logan said multiple departments have kept in contact daily through group messaging to share and relay any information that could be of concern to the area.

Although there has been no indication that something will happen in Tuscumbia or Colbert County, Chief Logan said the department will remain vigilant to pursue any credible information.

In Lauderdale County, Sheriff Rick Singleton said that constant communication makes a world of difference in making sure the community is protected.

"I don't think any of us have heard anything specific as far as any specific threats but we will be more attentive tomorrow; we will be keeping our ear to the ground and watching and listening to see what happens as things maybe develop,” Sheriff Singleton said. “If we get information, we make sure they're aware of it and vice versa."

The sheriff said it's a benefit of being in an area with so many agencies.

"Communication is key,” Sheriff Singleton said. “Social media—that's one of the good things about social media—it does give us an avenue of communicating back and forth quickly."

Sheriff Singleton said if anyone in the community hears of any events where someone is inciting violence, they should immediately contact their local law enforcement.

TUSCUMBIA, Ala. — The COVID-19 pandemic is having an impact on another city office, this time in the Shoals.

The City of Tuscumbia announced on its Facebook page that municipal court will be canceled for January 20 and the city clerk’s office is closed.

China hits Trump officials with sanctions on their way out