SHEFFIELD, Ala. – Since January, a new superintendent has been leading the Sheffield City School System. On Thursday, Keith Davis took the opportunity to meet with community leaders and school system stakeholders to update them on the state of the system. 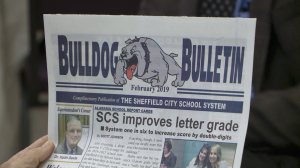 The headline on this month’s Bulldog Bulletin states, “SCS improves letter grade”. It is the first published newspaper by the school system and meant to reach the community. Just one of the brainchild’s Superintendent Davis is implementing.

“We recently received our report card. We were one of the few school districts in the state that had double digit gains,” stated Davis. “We received a B, which we are very proud of.”

Davis says he is proud of where previous superintendents have brought them. And while looking at all of the improvements around town recently, Davis said he wants to involve community investors even more in education.

“I just want to add a couple of more ideas to it, and that is one of the purposes of having this meeting today. It is to get with our partners in our community and our stakeholders and share ideas. As a group I know we can get far more done.”

There are a couple of items Davis would like to see improvement on. One of which is motivating students to perform there best during a time of constant testing. The other, parent buy-in.

Davis plans to ramp up his vision for the future in the coming months. Before becoming the Sheffield Schools Superintendent, Keith Davis spent 8-years as superintendent with Winfield City Schools.

MUSCLE SHOALS Ala. — A Muscle Shoals restaurant that previously converted into a drive through grocery store has added some new items to its inventory.

Alabama Bliss Bistro is now selling a variety of different cleaning and sanitation supplies. The restaurant is even selling non-medical grade face masks. Owner Miranda Ball said she decided to convert the store as a way to help customers who had trouble finding essential items in grocery stores and those who didn’t feel safe going out to shop.

TUSCUMBIA, Ala. — Ivy Green is the birthplace of Helen Adams Keller, one of the world’s most influential women. She was the first deaf-blind person to earn a bachelor of arts degree. The story of her life is documented in the play, “The Miracle Worker.”

Her childhood home in Tuscumbia now serves as a museum, that was unfortunately closed for nine weeks due to the COVID-19 pandemic. Now under Governor Ivey’s safer-at-home order, it’s reopened – although the visitor experience looks a little different now.